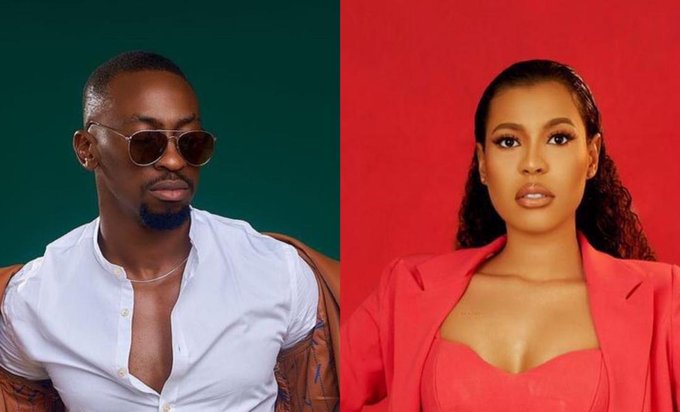 Big Brother Naija housemate, Saga, has been slammed for revealing the secret task he was given by Biggie to his love interest, Nini.

Biggie during Saga’s dairy session on Wednesday, September 15 instructed him to start a fight and avoid Nini until the next diary session.

He said if he executes the prank, Saga will be rewarded with 200 Abeg Naira and 200 BBtokens.

Saga, however, told Biggie that the prank was a difficult one but he will try his best to execute.

Also, Biggie gave the same task to Liquorose concerning Emmanuel and she has been diligent in executing the prank.

However, after Nini had an altercation with Cross on Wednesday, Saga apologized to Nini and revealed the secret task to her.

While he tried to calm Nini down following her altercation with Cross, Saga revealed that Biggie tasked him to start a fight with Nini during his Diary Session.

He confessed and stated that he would never do such a thing to her. Saga went on to tell Nini what transpired between him and Biggie in the Diary Session on Tuesday.

Yesterday during the Diary Session, he (Biggie) said there’s a task for me, that I should fight with you and not talk to you till the next Diary Session.

“Have you gone for the next one?” Nini asked.

When Saga replied in the negative, Nini told him, “Good luck to you.”

“But I can’t do this to you. No. I’m so sorry,” Saga told Nini, stating that he met Biggie that he couldn’t do the task but Biggie did not answer him.

He added that he knows the world and Biggie are angry at his action.

Nini, however, teased him that he couldn’t even handle the task for 24 hours.

Here’s the video of where saga confessed the whole thing about what Biggie asked him to do to Nini 🙆🏽‍♂️😂#BBNaija pic.twitter.com/j2L0JhULdB

Reacting to his action, fans took to Twitter to comment on Saga’s inability to carry out his task because of his love for Nini.

Saga just confessed to Nini that Biggie asked him to pick a fight with her but he could never do it to her. he even said he even went to the secret diary session to beg Biggie that he couldn’t do it but he didn’t answer him

I can’t believe Saga has decided to let go of the 200bb tokens,200 Abegnaira and other goodies that might come after the successful prank by confessing to Nini about the whole prank and what Biggie asked him to do con Dey remove mic. He doesn’t need 90 million or what ?? #BBNaija

Since Nini already knows about Saga’s prank, Emmanuel will soon find out too.

Because Nini will definitely tell Emmanuel about it if he discuss about Liquorose with her. #BBNaija

Can I be unsurprised but still shocked that Saga indeed has confessed to Nini after less than 24 hours?

Maria pulled a prank on everyone for a whole week!#BBNaija

Saga is telling Nini that Liquorose probably has the same task too
😠#bbnaija pic.twitter.com/DIzcvgJZQL

“Have you had your next one? Well, good luck to you”. Even the babe knew a code was being broken. I hope her boyfriend steps aside for Saga after the game. The question would be whether this is what Nini wants to see in her man. https://t.co/GxxZNvCg1a

What did i just watch oo saga ,saga just told Nini about the prank😂😂😂#BBNaija pic.twitter.com/MNrAdSmNOU

Saga has told Nini about the secret task and this is going to mess Liquorose’s task. Saga is gone. This isn’t how to love someone. #bbnaija pic.twitter.com/YtGTKWB9Lk

Big Brother told Saga to prank Nini and he told her, this guy is finished and worse that Ozo.#BBNaija

Nini – “Have you had your next Diary Session?”

Don’t Mind Biggie, I can never do that to you 💀

Liqworose even likes Emmanuel more than the way Saga likes Nini but she’s focused. She understands the game comes before her emotions.

Nini : “I think I would have pulled the prank off with you if Biggie asked me to ”

Saga : “and I would have forgiven you easily”#BBNaija

Who said Saga can execute the task?? come and see him under the duvet with Nini apologising 😂😂😂😂#BBNaija pic.twitter.com/hwIvjgKNQ8

i knew saga wouldn’t do Biggie’s task..but this one of reporting Biggie to Nini shocked me😂..#BBNaija pic.twitter.com/D3g1w02c95

Saga will soon propose to Nini, you people should just watch😭#BBNajia

Biggy Saga told Nini that Liquorose is probably doing the same prank he was given……abort the mission ke mntase ngok….but am not gonna lie I was enjoying it #BBNaija pic.twitter.com/qqZDyxVhv9

When Arin told Saga to ease up on the Nini thing, he went to tell Nini what Arin said. When the guys gave him the same advice, he also went to tell Nini. Now he has also gone to report Biggie to Nini.

He has no limits 😂🤣 #BBNaija

Saga to Nini :biggie asked me to play this prank on you

Wait o, are you guys really sure Saga will let go of Nini when they come out of big brother house? #BBNaija

Cross Breaks Down In Tears After Nini Called Him ‘Dumb’ During Fight, Reveals He’s Dyslexic (Videos)