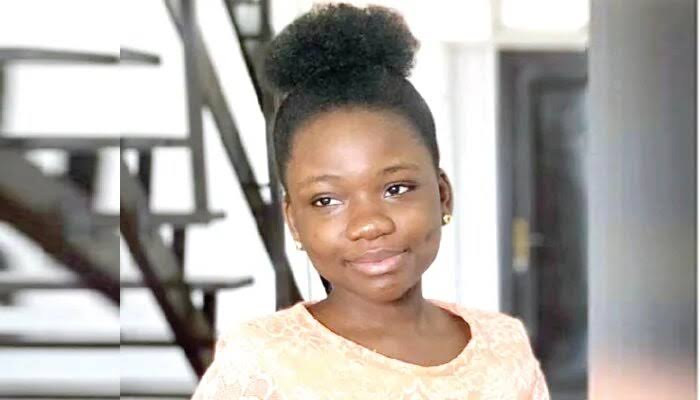 A 14-year-old pupil of Premiere Academy, Lugbe, Abuja, has died of an infection called sepsis after a condom was found in her private parts.

Sepsis occurs when chemicals released in the bloodstream to fight an infection trigger inflammation throughout the body. This can cause a cascade of changes that damage multiple organ systems, leading them to fail, sometimes even resulting in death.

The SS1 pupil, Karen-Happuch Akpagher, was believed to have been sexually abused before she was withdrawn from the school by her mother, Mrs Vihimga Akpagher, on June 19, 2021, for treatment.

Karen-Happuch, however, died two days later in a hospital in the Wuse 2 area of Abuja.

Speaking to Punch Metro, Vihimga said she received a frantic call from her daughter a few days before her death, asking her to come and withdraw her from the school, because she was not feeling well.

She said although the school was unwilling to release the pupil and even argued that there was no need to fret, her daughter remained adamant and even cried that she wanted to go home.

When I called the principal, he said my daughter would need to be isolated for five days (upon her return). I felt that I should go home since the school said it could take care of her. On my way home, my daughter called again using the school’s phone and asked where I was. I told her that I came, but turned back and she started crying.

So, I got angry and asked her why she was stressing me since she would be returning home soon for the holiday. So, she asked to speak to her uncle. She said, ‘You people don’t know why I am asking you to come and pick me and you are leaving.’

The distraught mother stated that while she was still contemplating whether to return to the school, she was informed by the housemother that Karen-Happuch could hardly walk the day before and had been crying. The housemother advised that the young girl be taken to a hospital for proper check-up.

She added that she picked up her daughter, but when Karen-Happuch was brought home, she was not her usual self and she seemed withdrawn.

When we got home, she wasn’t her usual happy self. She switched off all the lights. She could not even look at us in the face. She slept throughout that day and ate some food. But by the morning of Monday, June 21, 2021, I noticed that her condition had deteriorated and took her to hospital, and while examining her, the doctor saw a discharge, ran a test and discovered that it was a condom that was left in her. They tested her urine and it contained sperm; and like that, infection and sepsis led to her death.

When asked if her daughter revealed the identity of the person who defiled her, the bereaved mother responded, “I picked her up on June 19 and she died on June 21. She slipped into a coma and died. She was traumatised.”

Vihimga said she challenged Premiere Academy, but the institution only promised to look into the matter.

She added that she wrote a petition to the FCT Police Command and some employees of the school were invited for questioning.

The grieving mother noted that her daughter had a dream of becoming a nurse, having been diagnosed with diabetes at age nine, but that dream had been cut short.

When asked if she was sure that Karen-Happuch was defiled at the school and not at home, Vihimga said;

My daughter was diabetic. If that thing had been in her for one month, she would have died long ago.

She added that she got information that at least three employees of the school had been dismissed for sexual abuse, but the management was more concerned with protecting its image.

Efforts to obtain the medical report from the deceased’s mother proved abortive as she said the hospital had refused to release it.

However, Head of the Communications Department, Dele Onakoya, denied the allegations, but admitted that Premiere Academy was aware of the matter.

It is not true. But the school is aware of the matter, which we are saying is not true. Why we will not like to comment much on the issue as the matter is before the police and the right thing to do is to allow them to dig deep and get to the root of the matter.

Any response from the school may compromise their investigation. We don’t want to be seen as covering up anything. We trust in the ability of the police to get to the root of the matter and tell the public what actually happened. 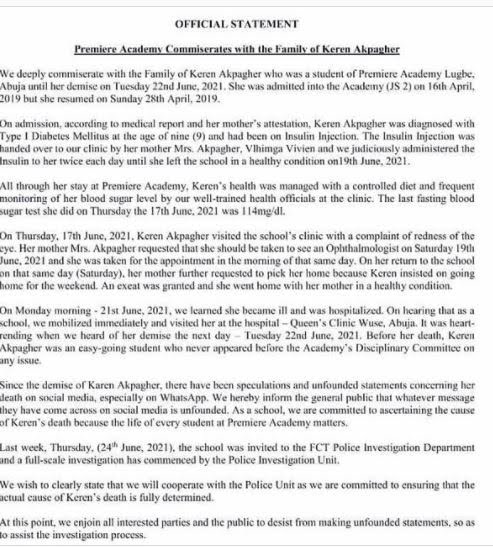 6-Year-Old Raped To Death In Kaduna