Athletics Integrity Unit made this known in a press statement, saying that the 32-year-old Nigerian athlete tested positive for a banned substance – human growth hormone.

The anti-doping body said Okagbare tested positive for the prohibited substance in an out-of-competition test on July 19 – four days before the Olympics opened.

The results of that test were only received by track and field’s anti-doping body late Friday after Okagbare, who won her heat in 11.05seconds, qualified for the semifinals of women’s 100m race at the Olympics.

With the suspension, Okagbare will no longer compete at the Tokyo Olympics.

The Athletics Integrity Unit (AIU) has provisionally suspended Blessing Okagbare of Nigeria today with immediate effect after a sample collected from the sprinter tested positive for human Growth Hormone.

Growth Hormone is a non-specified substance on the 2021 World Anti-Doping Agency (WADA) Prohibited List and a provisional suspension is mandatory following an adverse analytical finding for such substance under the World Athletics Anti-Doping Rules.

The AIU collected the sample from Ms. Okagbare during an out-of-competition test on 19 July. The WADA-accredited laboratory that analysed the sample notified the AIU of the adverse analytical finding at mid-day Central European Time yesterday, Friday 30 July.

The athlete was notified of the adverse analytical finding and of her provisional suspension this morning in Tokyo. She was scheduled to participate in the semi-finals of the women’s 100m this evening.

The AIU will make no further comment on this matter at this time. 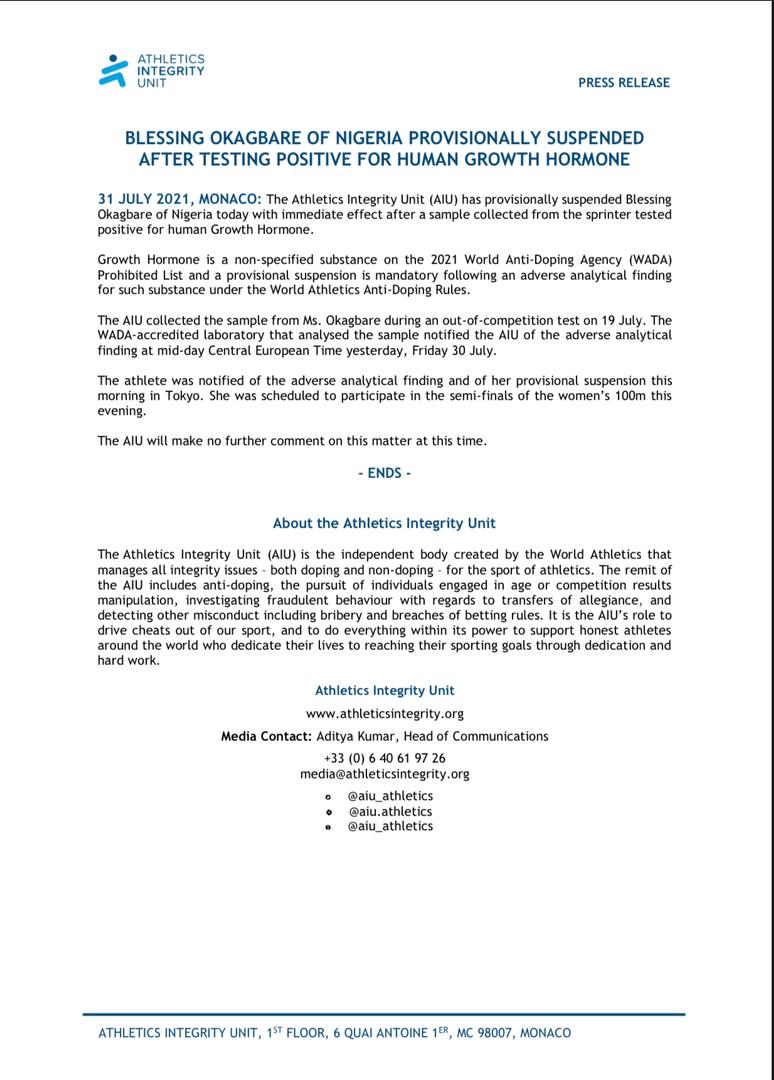 Okagbare, who was billed to be in action on Saturday for the 100m semi-final race, will no longer be able to participate due to her suspension.

The sprint queen and Grace Nwokocha were expected to face daunting tasks of reaching the final of the women’s 100m at the ongoing Tokyo Olympics on Saturday.

Nwokocha finished third with a new personal best of 11.00secs behind Shelly-Ann Fraser-Pryce, who is aiming to become the first woman to win three Olympic 100m gold medals.

She won the heat with an impressive 10.84secs, with Switzerland’s Ajia Del Fonte placing second with 10.91secs.

Meanwhile, Okagbare was expected to run in her third semi-final since she made her debut in the event at 2012 Olympics in London, has been drawn in lane five of the first semi-final heat against defending champion Elaine Thompson-Herah of Jamaica, who ran 10.82 seconds to win her first-round heat and Great Britain’s Dina Asher-Smith.

The new development serves as another setback for Team Nigeria’s medal search after 10 Nigerian athletes were earlier banned from the Games.

Athletics Integrity Unit (AIU), a unit of International Association of Athletics Federations (IAAF) that was founded in April 2017 to combat doping in the sport of athletics, announced the ban in a statement on Wednesday, July 28.

It stated that the athletes were not eligible to compete because the minimum testing requirements under Rule 15 of Anti-Doping Rules were not met by ‘Category A‘ Federations.

In simpler terms, the Athletics Federation of Nigeria (AFN), the body that governs athletics in Nigeria, which falls under the ‘Category A’ federations, did not conduct enough urine and blood tests for these athletes.

Reacting, the athletes involved and some others protested the ban on Friday, calling out the sport ministry for its incompetencies.