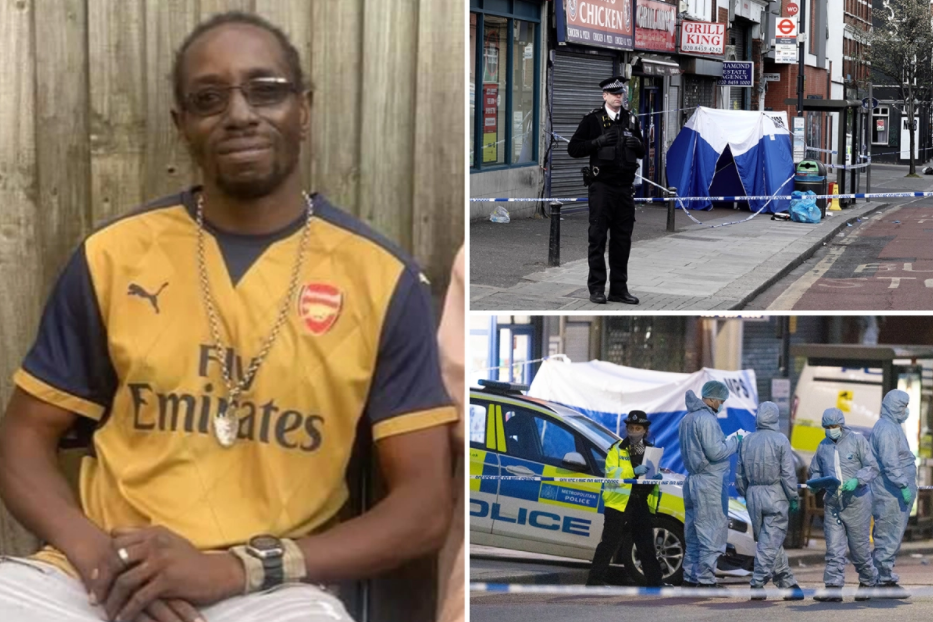 A 40-year-old Nigeria dad was stabbed to death on a busy London street in the United Kingdom while trying to protect his son, it has emerged.

Michael Olatunde Fadayomi, who has been hailed as a “pillar of the community“, was a football coach and a devoted single dad who was popular in the community.

He was knifed after a fight started on the top floor of a busy bus in North West London on Thursday, April 29.

Witnesses said Fadayomi’s teenage son – understood to be heading to football training – “had some problems on the bus with someone“.

When his father intervened, the confrontation escalated and spilled out onto the pavement. The son – who has not been named – desperately tried to intervene as his father was repeatedly stabbed before an ambulance arrived.

Emergency services rushed to the scene shortly after 5pm, but despite the best efforts of paramedics, Fadayomi died.

Police have since arrested a 42-year-old man on suspicion of murder and sources have said the victim was “in the wrong place at the wrong time“.

According to Mirror, the suspect is being held at the police station and police say they are not searching for anyone else connected with the murder.

A passenger on the bus who witnessed the tragedy said the suspect stabbed Tunde and then walked away “without a care in the world.”

He calmly walked away. It was like nothing happened. He just walked, and no one had bothered to go after him. This is a very dangerous man who needs to be taken off the streets before he strikes again.

The witness, who wished to remain anonymous, said the argument started when the suspect accused Tunde’s son and his friend of preventing the bus from moving, whereas the vehicle was stationary because it was changing drivers.

The bus had stopped outside Willesden Garage and the man just kept shouting that he needs to see his mum and then he started accusing the boys of being the reason why the bus wasn’t moving.

I was on my phone and was thinking ‘why is this grown man shouting at these boys?’ The boys were trying to calm him down but then he reached into his crotch and pulled out a blade. The boys ran off the bus and one said he was going to get his dad.

The witness said the suspect got off the bus too but went back on shortly before Tunde boarded and made his way up the stairs.

The dad asked the man why he had troubled his son. They started shouting at each other before the killer took out the knife again and said, ‘I want to go and see my mum’.

Mobile video footage shows the two men arguing on the top deck before the dad comes off the bus, followed by the suspect.

They started fist fighting on the street before the man started stabbing the dad. People started screaming and after the dad fell, the knifeman stood in the road with everyone else.

Bystanders can be heard screaming while others try to intervene in the distressing clip circulated on social media.

The witness said he was disgusted by the actions of people who whipped out their phones after Tunde had been stabbed rather than try and help him.

I was the only one who called the police. We need to change how we use technology and use it sensibly, not stand by and watch a man dying. This man died protecting his son. As a father myself, I understand why he confronted his killer, and we would do the same.

He did what any decent father did and he lost his life while the killer walked away without a care in the world. He needs to be found and quickly.

A teenager, thought to be Tunde’s son, is seen in a video being comforted in the aftermath of the killing.

Dental nurse, Tracey Dolling, 43, who rushed across the road to help the victim, told The Sun;

I did CPR. It’s very, very sad, awful, absolutely devastating. The boy had some problems on the bus with someone, he called his dad, his dad came down and that’s what happened. Murdered.

Police are calling on people not to share the footage and detectives from Specialist Crime are leading the investigation, led by DCI Claire Hine.

Rema Brags About His ‘Golden’ Sex Organ, Talks About Music Career, Producers, Photographers In Twitter Rant On His 21st Birthday