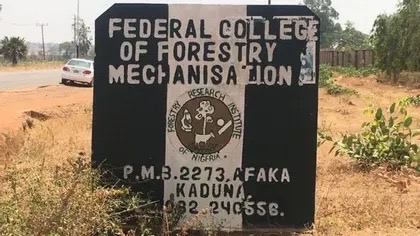 Bandits have on Tuesday released a new video of students abducted from Federal College of Forestry Mechanisation in Afaka, Kaduna State.

It would be recalled that 39 students, including a pregnant woman were abducted in March and between April 5 and April 8, the bandits released 10 of the abducted students, leaving 29 of them in captivity.

A day after the abduction, a video surfaced online, where the students were seen sitting on the ground in an unknown location and guarded by armed men whose identities were concealed.

The victims, who were seen being tortured by the armed men, appealed to the government to rescue them.

In another video released on Tuesday in an unknown location, according to DailyTrust, a bandit was heard speaking in Hausa and later Fulfulde.

In the video that is four minutes and 56 seconds long, which was shot at night, the gunmen asked some of the students to come forward and speak to the camera.

The pregnant woman the bandits addressed as Hajiya pleaded with their parents to rescue them, saying;

The bandits also introduced a woman they addressed as the wife of a military officer who was abducted from her home in Tirkania-Agwa in Chikun Local Government Area of Kaduna State.

The victim, who said her husband is a naval officer working in Warri, Delta State, urged the Federal Government to come to their rescue.

She said the bandits earlier requested for N30million for their release.

Kaduna is one of the states in Nigeria facing the worst cases of kidnapping by bandits.

On April 20, an unknown number of students were kidnapped from Greenfield University, a private institution in the Chukun Local Government Area. A security guard was also shot in the attack.

There is no official confirmation of the number of students kidnapped from the school but five of them have already been killed by their abductors.

On April 22, two nurses were kidnapped from Idon Hospital in Kajuru LGA of the state after an attack by gunmen.

The armed men were said to have gained access to the hospital through the fence, opened fire before abducting the nurses who worked the night shift.