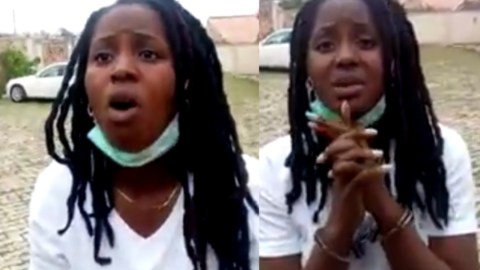 Police have arrested two more persons involved in the harassment and molestation of a female suspect found at the scene of an arrest.

Some officials of the force had gone from Lagos to Ibadan, Oyo State, to arrest a suspected robber and kidnapper when the lady identified as Towobola was met at the scene.

The officers harassed her by asking her vulgar and personal questions about her relationship while making a video of it.

The video of the men went viral and sparked an outcry from many Nigerians on Wednesday, July 22, including the police force.

The Inspector-General of Police, Adamu Mohammed, condemned the unprofessional act of the men involved and ordered a discreet investigation.

Subsequently, two police officers, ASP Tijani Olatunji and Inspector Gboyega were arrested for their involvement in the case on Thursday, July 23.

In a statement released on Friday July 24, the spokesperson of the Force, Frank Mba, said the two additional persons arrested are CPL Aiyedun Akeem and one Ope Owoeye – the civilian accomplice popularly known as ‘Wyclef’, bringing the total number of persons arrested to four.

Mba said an investigation is still ongoing after which the Force internal disciplinary procedures will commence for the officers.

He stated that police detectives from the State CID, Panti, Yaba, Lagos state have established contact with the victim with assurances that justice will be done.

Watch video of the policemen harassing the lady below;