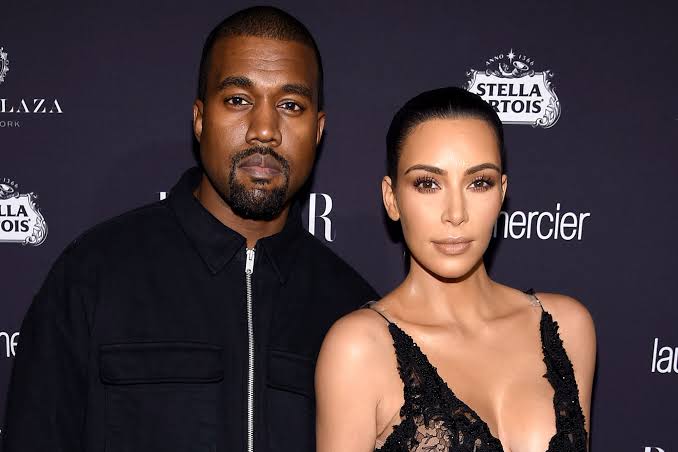 Kim Kardashian has finally broken her silence on her husband Kanye West’s recent outbursts on Twitter.

For over two days now, the rapper has engaged in Twitter rants, calling out his wife Kim Kardashian and mother-in-law, Kris Jenner, rapper Meek Mill and many others.

West recently revealed he has been trying to divorce Kim Kardashian for two years after she met with Meek Mill at a hotel.

He also accused his mother-in-law, Kris Jenner of “white supremacy”, claiming she teamed up with his wife to put out a statement about his behavior without his approval.

Kanye, 43, claimed he had been trying to divorce Kim ever since she went to a hotel room with rapper Meek Mill as he accused her of trying to get him “locked up” for his rants.

Kim has now released a statement addressing his mental health and his experience with bipolar disorder, but she made no mention of the divorce.

Posting her statement on Instagram, the mother of four wrote;

As many of you know, Kanye has bipolar disorder. Anyone who has this or has a loved one in their life who does, knows know incredibly complicated and painful it is to understand. I’ve never spoken publicly about how this has affected us at home because I am very protective of my children and Kanye’s right to privacy when it comes to his health.

But today, I feel like I should comment on it because of the stigma and misconceptions about mental health. Those that understand mental illness or even compulsive behavior know that the family is powerless unless the person is a minor. 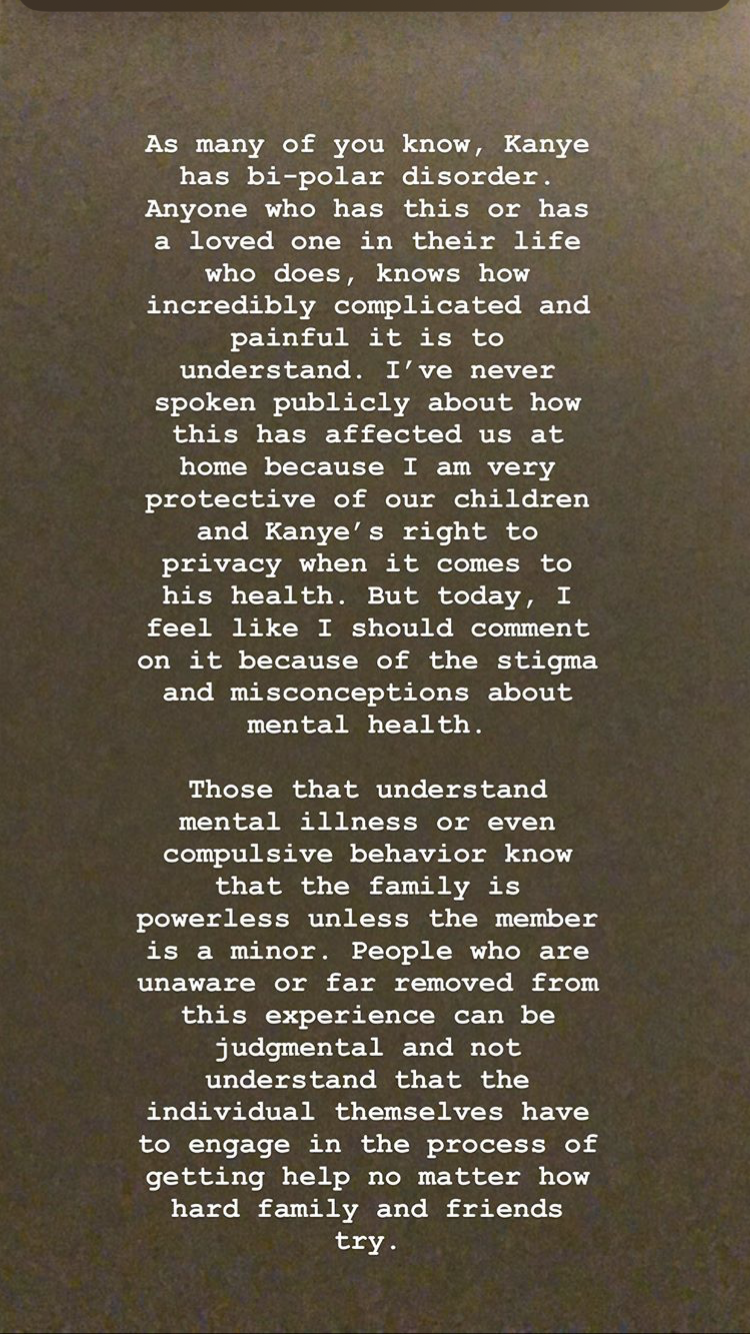 I understand Kanye is subject to criticism because he is a public figure and is actions at times can cause strong opinions and emotions.

He is a brilliant but complicated person who on top of the pressures of being an artist and a black man, who experienced the personal loss of his mother, and has to deal with the pressure and isolation that is highlighted by his bipolar disorder. Those who are close with Kanye know his heart and understand his words some times do not align with his intentions.

Living with bi-polar does not diminish or invalidate his dreams  and his creative ideas, no matter how big or unobtainable they feel to some. This is part of his genius and as you have all witnessed, many of his big dream come true. 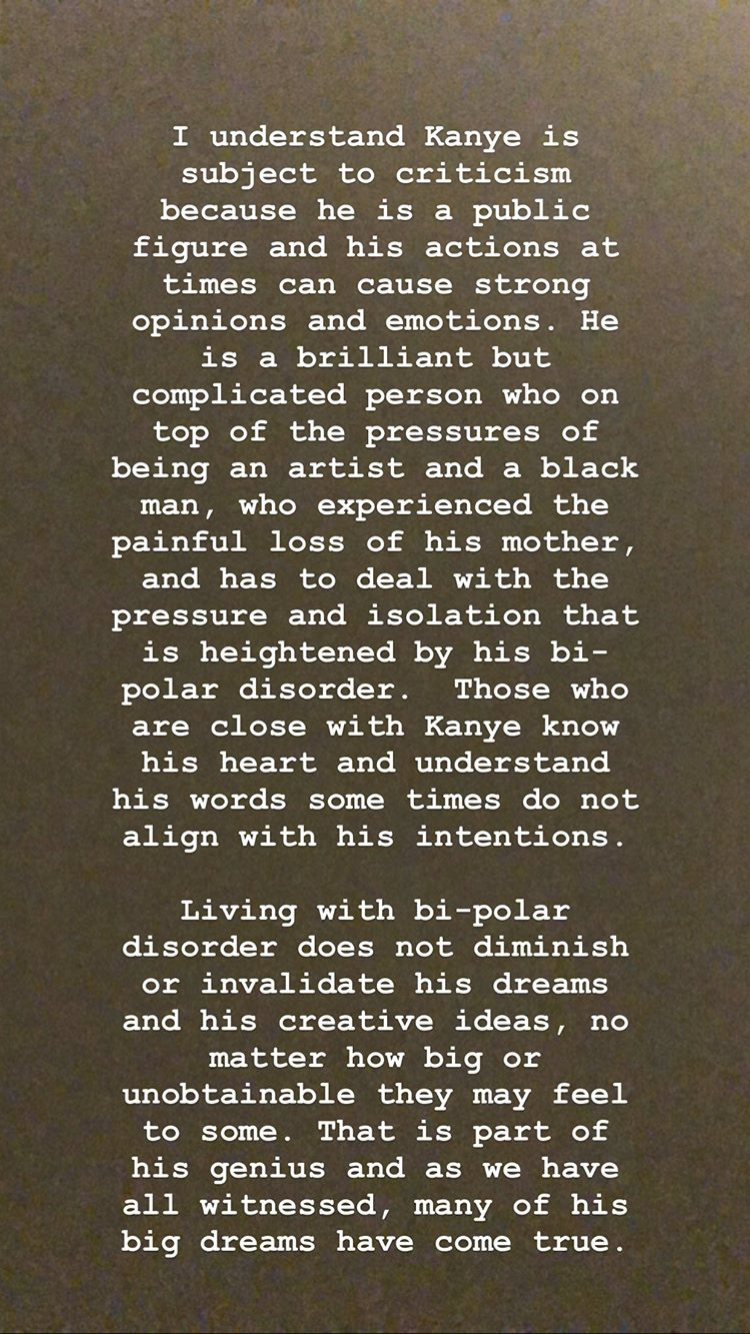 We as a society talk about giving grace to the issue of mental health as a whole, however we should also give it to the individuals who are living with it in times when they need it the most.

I kindly ask that the media and public give us the compassion and empathy that is needed so that we get through this. Thank you for those who have expressed concern for Kanye’s well being and for understanding.

With love and gratitude. 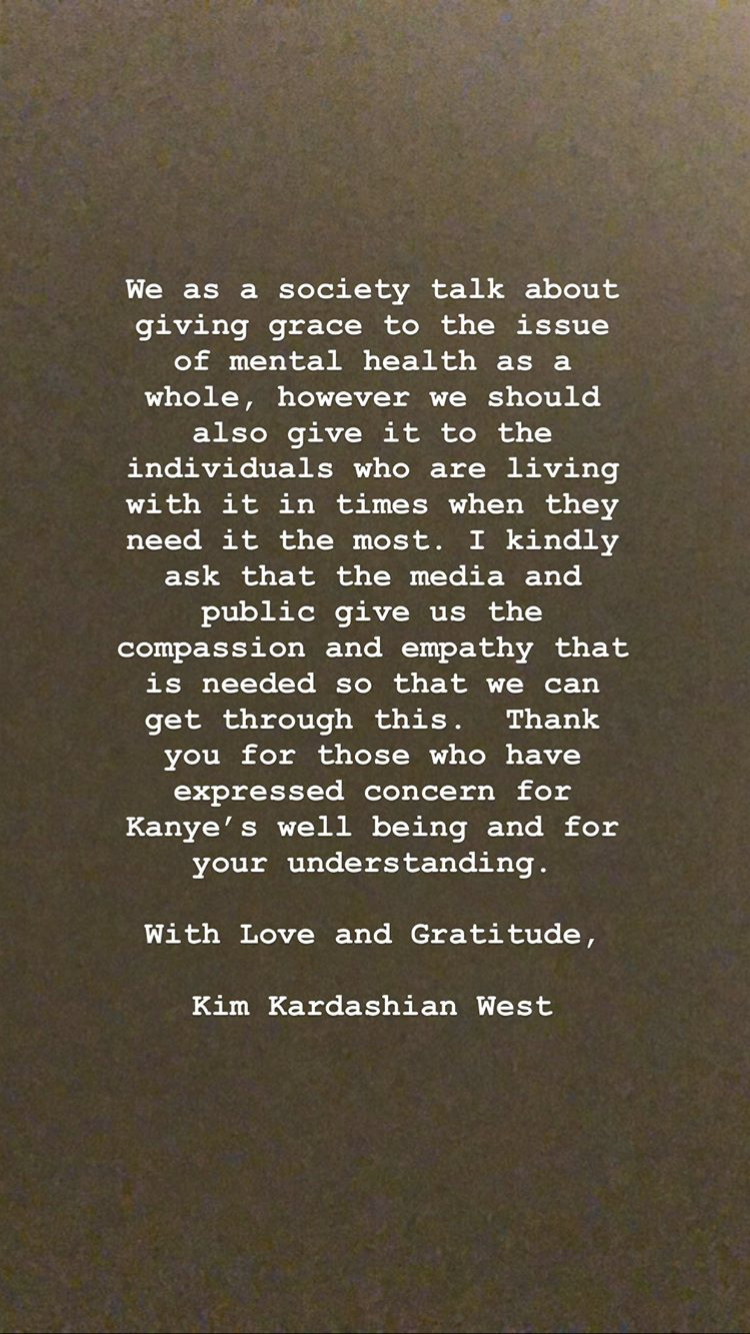 It is claimed that Kim is seeking legal advice after Kanye‘s outburst and that she has been meeting with lawyers to talk about divorce.

This is however yet to be confirmed, as she made no mention of their divorce in her statement.