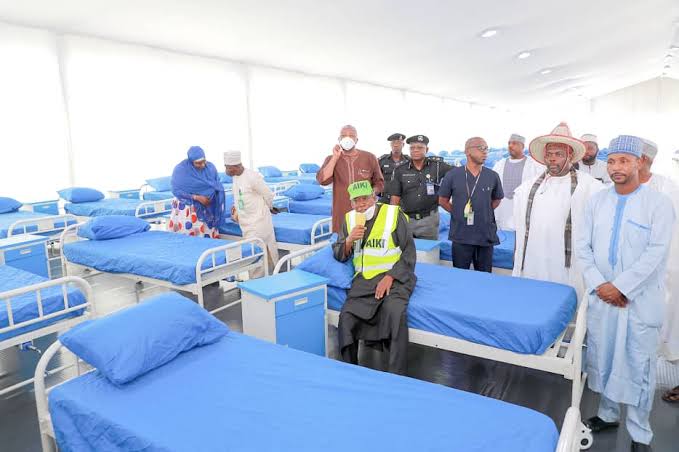 Kano State Government has faulted a viral video which showed that Sani Abacha Isolation Center is not functional, as claimed by the state, but just being constructed.

It would be recalled that the viral video had sparked an outrage on Twitter as many Nigerians demanded an explanation for the empty isolation centre.

Read Also: StopCovidLies Trends After Man Shares Video Of Empty Kano Isolation Centre Even With Over 900 Confirmed Coronavirus Cases In The State

In a statement signed by the state Commissioner for Information, Malam Muhammad Garba, the video is false and is aimed at discrediting the effort of the state.

Garba noted that the isolation centre as shown in the footage is truly under renovation by the Coalition Against COVID (CACOVID).

According to Garba, the isolation centre which was initially meant to accommodate 500 beds, is being redesigned based on recommendation and standards set by the Presidential Task Force on COVID-19 (PTF) and the Nigeria Centre for Disease Control (NCDC).

He said while the project is being reviewed and installation work continues, 218 out of the 500 beds planned for the centre were deployed to other new centres – renovated Abubakar Imam Urology, Daula Isolation Centre and Karfi Sports Institute, while the remaining were retained at the Sani Abacha Isolation Centre.

Speaking further, the commissioner assured that the 282 bed capacity Sani Abacha Isolation Centre as recommended by the relevant health authorities will soon be completed and put to use.

He declared that the video is false and is an attempt to discredit the effort by the coalition in the fight against COVID-19.

A part of the statement reads;

Whoever is behind the filming does so to deliberately distort the datum considering that even in the clip, it shows that the project is still ongoing but calculatedly moves away from filming the exercise just to accomplish the task of garbling the fact.

Garba, therefore, called on Nigerians to ignore the video clip, saying it is the ‘handiwork of mischief-makers’ and that the state government is committed to serving the residents of Kano.