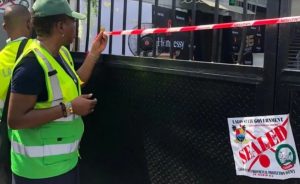 It was gathered that Quilox was sealed for noise pollution and traffic congestion.

The sealing off comes after the club organised its annual 36-hour party.

Recall that the  Lagos State Police arrested and detained the club owner and member of House of Representatives, Shina Peller, at the Moroko Police Station.

Peller, who is representing Iseyin/Itesiwaju/Kajola/Iwajowa Federal Constituency, Oyo State, was allegedly arrested while trying to take the bail of some clubbers.

In a statement by Peller’s Press Secretary, Kola Popoola, the Police was reported to have detained and seized mobile phones of Peller.