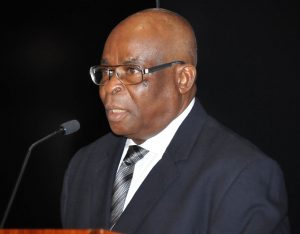 Embattled Chief Justice of Nigeria, CJN Walter Onnoghen, has finally opened up on why he failed to declare his assets.

Onnoghen in his statement attributed his failure to declare his assets to ‘forgetfulness’.

The embattled CJN explained that he thought that the form SCN 000015 filed in December 2016 was enough to cover for the declaration of his assets.

He is scheduled to be arraigned before the Code of Conduct Tribunal, CCT, on Monday, over failure to declare his assets after his appointment as CJN.

An Anti-Corruption and Research Based Data Initiative had filed a petition against Onnoghen over the non declaration of his assets.

The group alleged that Onnoghen failed to declare ownership of his domiciliary accounts.

Headed by one Denis Aghanya, the group said its petition was necessitated by the closeness of the 2019 elections and the importance of the judiciary before and after the elections.

It said the petition was submitted:
“bearing in mind the imminence of the 2019 elections and the overwhelming role of the judiciary both before and after the election.”

Responding to the petition, Onnoghen, in a statement made to the Code of Conduct Bureau, CCB said he “forgot to update his asset declaration, after the expiration of his 2005 declaration”.

“My asset declaration form numbers SCN 00014 and SCN 00005 were declared on the same day, 14/12/2016 because I forgot to make a declaration of my assets after the expiration of my 2005 declaration in 2009. Following my appointment as acting CJN in November, 2016, the need to declare my assets anew made me to realize the mistake.

“I then did the declaration to cover the period in default. I did not include my standard charted bank account in SCN 000014 because I believed they were not opened.

“I did not make a fresh declaration of asset after my substantive appointment as CJN because I was under the impression that my SCN 000015 was to cover that period of four years which includes my term as CJN.”

Continue Reading
You may also like...
Related Topics:CJN, Onnoghen