In the final episode of the Lifetime documentary series Surviving R. Kelly, Chance the Rapper made an appearance and he said he regrets working with R.Kelly. 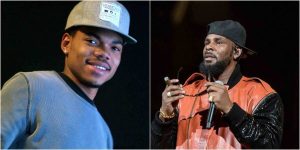 “I didn’t value the accusers’ stories because they were black women. I made a mistake.”

However, Chance subsequently took to Twitter stating that his quote, (originally taken from a May interview with Lemieux for online magazine Cassius) was taken out of context.

“The quote was taken out of context, but the truth is any of us who ever ignored the R Kelly stories, or ever believed he was being setup/attacked by the system (as black men often are) were doing so at the detriment of black women and girls. I apologize to all of his survivors for working with him and for taking this long to speak out.”

Chance also tweeted a clip of the original interview with Lemieux, which reveals greater context of the quote used in “Surviving R. Kelly.”

“We’re programmed to really be hypersensitive to black male oppression… But black women are exponentially [a] higher oppressed and violated group of people just in comparison to the whole world.

Maybe I didn’t care because I didn’t value the accusers’ stories because they were black women.” Find Chance’s full quote regarding R. Kelly, as well as his tweets and the original Cassius interview, below.

“Making a song with R. Kelly was a mistake. At the time, it wasn’t even present in my mind that people could feel any type of way about his presence on a track of mine.

Here’s the thing: I think for a long time I was only able to understand R. Kelly’s situation and presence in the world when it comes down to his trial and his accusations and his accusers as a victim. I don’t know if that’s because I’m from Chicago or ‘cause he made great music or ‘cause he is a black man.

We’re programmed to really be hypersensitive to black male oppression. It’s just prevalent in all media, and when you see niggas getting beat up by the police…that’s like a scene you see…like slavery for a lot of people, they envision men in chains, but black women are exponentially [a] higher oppressed and violated group of people just in comparison to the whole world.

Maybe I didn’t care because I didn’t value the accusers’ stories because they were black women. Usually, niggas that get in trouble for shit like this on their magnitude of celebrity, it’s light-skinned women or white women. That’s when it’s a big story. I’ve never really seen any pictures of R. Kelly’s accusers.”

It was recently revealed that several musicians turned down the request for participation, which reportedly included Erykah Badu, JAY-Z, Lady Gaga, and more.

Along with Chance the Rapper, John Legend and R&B singer Stephanie “Sparkle” Edwards were the only musicians to appear in “Surviving R. Kelly.”

In December 2018, an event promoting the docu-series was evacuated by the NYPD after a gun threat was called in at the venue.

Presidential Poll Is Battle Between Light And Darkness – Obi

Sex Trafficking Trial: R. Kelly Not Expected To Testify In…