The Adamawa state Ministry of Health yesterday confirmed 24 new cases of cholera in over four Local government areas in the state. 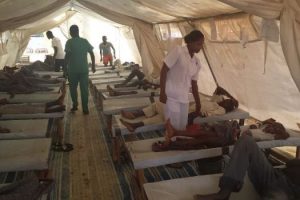 A statement on the cholera epidemic issued by the Information Officer of the ministry, Mohammed Abubakar, named the Local government areas as  Maiha, Mubi North and Mubi South.

It said that no death had been recorded with the  new cases. It added that 10 cases were recorded in Mubi South, eight in Maiha and six in Mubi North.  According to the statement, the epidemiological summary of the cases from May 1 to June 22 shows that 1,388 cases with 25 deaths were recorded in the four affected local government areas of Hong, Maiha, Mubi North and Mubi South.

Vigilante Shot Dead By Son While Testing Efficacy Of His…