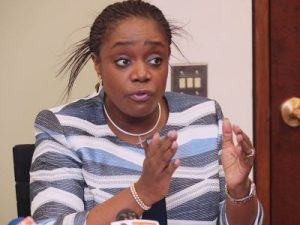 The total sum of N1.6billion illegal bank charges have been recovered from one of the many branches of one money deposit bank (MDB), Minister of Finance, Mrs. Kemi Adeosun told the House of Representatives on Thursday in Abuja.Adeosun, who said the recovery was made possible by the Treasury Single Account (TSA), added that other branches of the unnamed bank would go through the same process.According to her, the charges are illegally imposed and taken by banks as excess charges on the accounts they maintained for government agencies in the pre-TSA era.Speaking during an investigative public hearing into the status of TSA by the Abubakar Danburam-Nuhu-led Ad-hoc Committee, Mrs. Adeosun also said another N600 million was recovered from some MDBs in continuation of the TSA policy.She said the level and nature of the operations of the recoveries required the expertise of consultants which made the discoveries possible.She said: “We recovered N1.6billion in just one branch of a bank. There are many other branches.“We are looking at the many accounts holding government money before the TSA started; there is a lot.”On the recovered N600million, Adeosun said it was recovered as part of ongoing mopping up of government funds in accounts still being traced.  “We got the N600m recently, which was for charges by these banks. It was returned and we are still on it.“The TSA had been implemented almost 100 percent by the MDAs, though there are a few accounts still outside the system were being followed up,” she said. She also said some accounts operated by the Nigerian National Petroleum Corporation (NNPC) and the West African Examination Council (WAEC) were exempted from the TSA because of the nature of their operations.On the engagement of consultants for recoveries while the Office of Auditor-General of the Federation (AGF) has competent hands, the minister explained that consultants were engaged because their engagement assisted in achieving faster result.

EFCC Extradites FBI Wanted Suspect To US Over Alleged $3.5m…