Just In: Dino Melaye Defects From APC To PDP 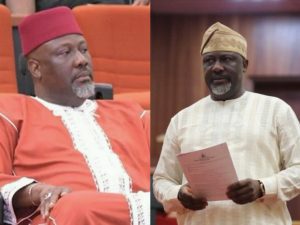 Senator Dino Melaye representing Kogi West has announced his defection from the APC to the PDP during the plenary session at the Senate this morning.

The embattled Senator is said to have made a dramatic appearance at the Senate, declaring his intention to cross-carpet to the PDP wing of the chamber.

Melaye had been away from the Senate for over a month after the Nigerian Police arrested him and he was subsequently admitted at the intensive care unit of the National Hospital, Abuja.

Appearing with clutches and neck support to Wednesday’s plenary, Melaye said he was no longer comfortable ‘sitting on his seat at the wing of the All Progressive Congress (APC), saying he would cross over to the wing of the Peoples Democratic Party (PDP).’

Raising a point of order on Wednesday, the  Senator thanked his colleagues, members of the House of Representatives, his constituents and the Nigerian populace for standing by him during his ‘travails.’

Melaye also thanked the leadership of the Peoples Democratic Party (PDP) for its support.
Mr Melaye, who attended the chamber with a neck support, also asked the Senate President, Bukola Saraki, to mandate the sergeant-at-arms to create a seat for him at the opposition wing of the chamber, after which he announced he would sit beside former Senate President, David Mark, pending the time a seat would be allocated to him.

He was thereafter aided by some of his colleagues to his preffered seat.

The move to deflect is however not formal yet. To make it officially, Mr Melaye would have to write the Senate president of his decision to leave his party and join the opposition.

The letter would then be read during Senate plenary.

Just In: Fayemi Resigns As Minister To Focus On Defeating Fayose’s Deputy