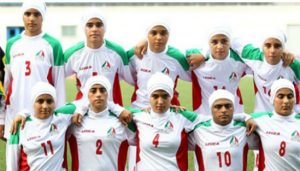 It has been discovered that Iranian soccer officials filled the women’s soccer team with eight big, strong, fast men.

Iranian soccer officials are accused of taking advantage of a sports policy which allows biological men to play on women’s teams if they believe they are women trapped in men’s bodies. This policy was announced by the International Olympic Committee and allows men to participate in Olympic events without undergoing sex change procedures.

When the policy was announced, people worried that some countries would take advantage of the policies and replace their female athletes with men and just as feared, it happened, starting with Iran.

Reacting to this, soccer authorities have ordered that all 8 men undergo gender testing to determine their levels of testosterone. This isn’t the first time the Iranian women’s team has fielded men. There were rumors that the players were men in 2011 and random gender checks in 2014 revealed some of the supposed women were men.

The problem is complicated by the Iranian culture which prohibits women from traveling unless they are given permission by their husbands or fathers. For example, Niloufar Ardalan who was recently prevented from accompanying the soccer team to a game in Malaysia because her husband would not allow her to travel

Groundbreaking! Meet 7 Women Appointed As MD/CEO Of Banks In…