3 Nigerians, 4 Others Jailed For Forging Immigration Documents In The U.K 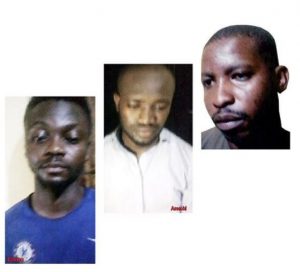 Seven members of a gang who conspired to manufacture and supply fake ID documents, including counterfeit British passports, to help immigration offenders live illegally in the UK have been jailed for more than 16 years.

From late 2015 to June 2017, officers unravelled the wide-scale manufacture and distribution of counterfeit documents by a London and Midlands gang.
Gang leader, Steven Kanaventi, 39, was jailed for 40 months and two weeks at Woolwich Crown Court on Friday.

Kanaventi supplied an undercover officer with a string of fake documents, including three passports for £800 each, a British residency permit for £600 and a university degree certificate for £200. Abdul Azeeza, a 58-year-old Nigerian ex-professional footballer, was sentenced to four years’ imprisonment after the court heard that “it was at his address” that the factory producing the false documents was found.

Azeeza was found with a false passport in his back pocket, a residency card in his wallet and “all the implements of making them on the kitchen table”. He pleaded guilty to two counts of possessing an identity document with improper intent and possessing equipment with the intention of making fake documents. Alfred Adekoya was sentenced to 40 months and two weeks in custody after pleading guilty to conspiracy to manufacture a fake document. Victor Ariyo, 53, acted as a go-between for Kanaventi and Adekoya.