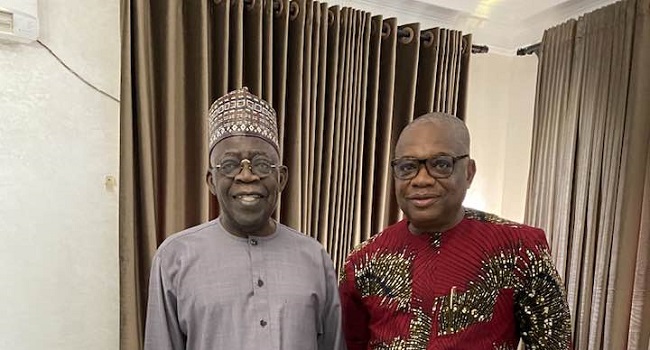 Senator Orji Uzor Kalu has debunked rumours making the round that the presidential candidate of the All Progressives Congress (APC), Bola Tinubu, was denied a visa to the United States of America.

Describing the story as fake news in a Facebook post on Saturday, the former Abia State Governor said Tinubu postponed the travel himself and was never denied a visa.

He said as the election draws closer, the opposition will spread more fake news against their presidential candidate and urged the party’s supporters to always ignore and keep their eyes on the ball.

Orji Kalu claimed that the State Department of the US confirmed to him that Tinubu will be received in the third week of December.

As the election draws closer, the opposition will spread more fake news against our presidential candidate but we should always ignore and keep our eyes on the ball. The news that Tinubu was denied a visa to the USA is as fake as other fake news.

Tinubu postponed the travel himself and was never denied a visa. The State Department of the US confirmed to me that Tinubu will be received in the third week of December. As the presidential candidate of our party with an outstanding personality, he will be warmly welcomed in the United States. OUK.

The APC Presidential Campaign Council had in a statement last week said that Tinubu will embark on foreign trips from December 4 to meet global leaders and pitch his Presidential aspiration.

In the statement posted on its Twitter handle, the campaign council disclosed that Tinubu and his delegation will be in London, USA, France, and key European Union member states to share his vision and plans and to also solicit the support of the Western powers for the democratic process that will usher in the new administration in Nigeria from May 29th, 2023.

It also stated that while in London, Tinubu will address the Chatham House, the United Kingdom’s elite Foreign and Policy Think-tank institution where he will speak on security, economy and foreign policy on Monday, December 5, 2022.