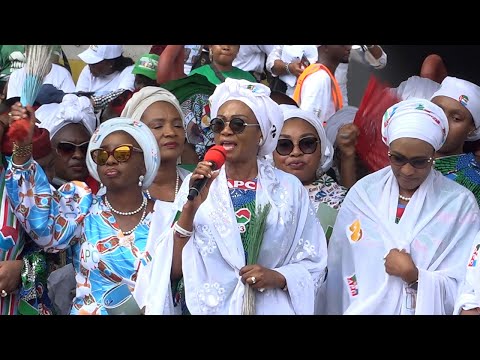 Senator Remi Tinubu has disclosed that the same-faith presidential ticket of the All Progressives Congress (APC) will open up a path for a Christian-Christian ticket in the future.

The APC combination of Bola Tinubu and former Borno State Governor Kashim Shettima, who are both Muslims, has triggered debates in the country with many accusing the ruling party of insensitivity to Nigeria’s diversity. But Senator Remi, who is Tinubu’s wife, told a gathering of APC South-West Women in Lagos State that the move will reset Nigeria’s political land space.

As regards the Muslim/Muslim ticket, this one will set the tone for the future. Sometime in the future, we will have a Christian/Christian ticket,

she said at the Mobolaji Johnson Arena in Lagos on Wednesday. “What God has done is marvelous in our land.”

She also cautioned people on their usage of social media, claiming that things are “doctored” on such platforms.

The youth of Lagos State and of Nigeria, I address you. Social media is good but it’s good for you to seek for proper information,

You all rely on the technology so much that you don’t really know the truth. The truth is doctored on technology. When you want to know people, the technology too will give you the right information.

The lawmaker equally thanked the attendees and extended the greetings of the First Lady Mrs Aisha Buhari who was absent from the rally but was earlier scheduled to be at the event.

We thank you for coming out in large numbers despite the challenges. My coming here is another homecoming,

About 23 years ago, God bless my husband to become the governor; I supported him as the first lady.