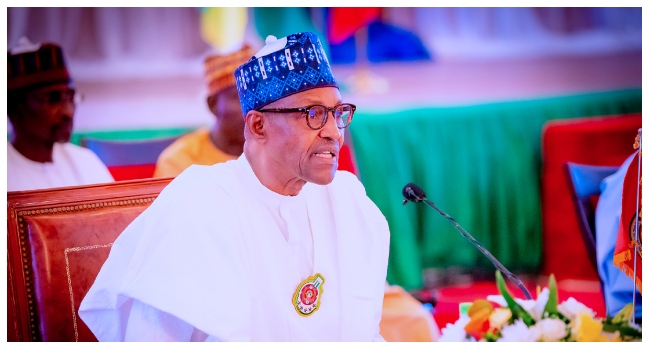 President Muhammadu Buhari, on Thursday has disclosed that the stunted development experienced at the local government level is occasioned by governors and local government officials who “pocket” public funds.

Buhari faulted state governors over what he described as their unfair treatment of his regime at the grassroots.

The president said this at a parley with members of the Senior Executive Course No. 44 (2022) of the National Institute for Policy and Strategic Studies, Kuru, held at the State House Banquet Hall Abuja.

Veering off of his prepared address, the President cited a personal experience involving a governor he did not name, misappropriating funds meant for local government council development, thereby inhibiting development at the grassroots.

Buhari’s comments followed remarks on the Course 44 presentation, themed ‘Strengthening Local Governance in Nigeria: Challenges, Options and Opportunities’, by some members of the Federal Executive Council, who aired their personal views on enhancing the autonomy of local governments.

A baffled Buhari described as “terrible” how some state governors received monies on behalf of local government councils in their states and would remit half of it to the council chairman, who would eventually pilfer from the remnant, leaving nothing for developmental projects.

I found it necessary to digress after reading my speech and this digression is a result of my personal experience.

This is my personal experience. If the money from the Federation Account to the State is about N100m, N50m will be sent to the chairman, but he will sign that he received N100m. The Governor will pocket the balance and share it with whoever he wants to share it with.

And then the Chairman of the local government must see how much he must pay in salaries and to hell with development. When he pays the salaries of the big man, the balance he will put in his pocket.

This is what’s happening. This is Nigeria. It’s a terrible thing; you cannot say the person who was doing this is not educated. He was a qualified lawyer, he was experienced, yet he participated in this type of corruption.

So it’s a matter of conscience, whichever level we find ourselves. As a leader, you sit here, with all the sacrifices the country is making by putting you through institutions and getting you ready to lead. The fundamental thing is personal integrity. May God help us.

The president also pledged that his government would “painstakingly” consider the recommendations contained in the paper presented by the SEC 44 to implement them.

While claiming that his administration has done a lot to build trust between the government and the people, the President noted that the report would provide direction to deliver good governance to the people at the grassroots and ultimately win back their trust in the government.

It is obvious that the government cannot afford to pay lip service to the recommendations contained in this report.

I assure you that the report will be treated with the seriousness and urgency it deserves. The government will study the report with the view to implementing the carefully detailed recommendations.

He commended the quality of the report and the commitment and dedication that went into it, saying the National Institute could be trusted to deliver on very critical and sensitive assignments of national importance.

‘Nigeria Is Not Broke’ Rather In Good Economic Standing- Zainab Ahmed, Finance Minister