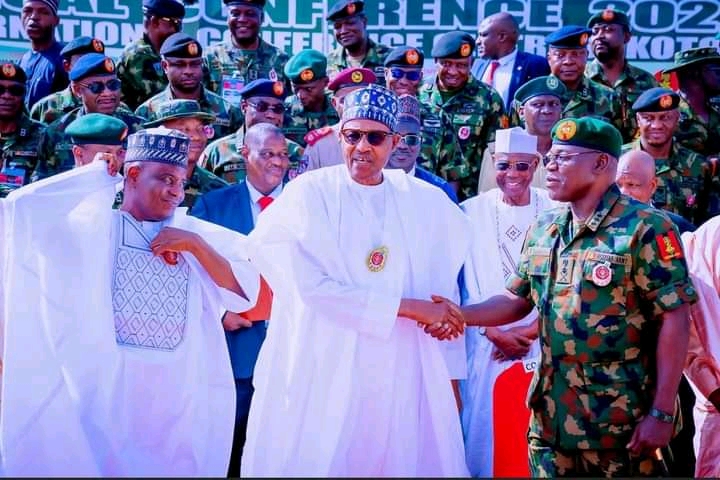 As Nigeria prepares for the 2023 general elections, President Muhammadu Buhari has urged the Nigerian Army to remain neutral and professional in their conduct before and during the elections.
Buhari stated this on Monday at International Conference Centre Kasarawa in Sokoto State while declaring the 2022 Chief of Army Staff Conference open.

He commended the doggedness of the Nigerian Army for returning peace not only to the northeastern part of the country but the entire country.

He expressed confidence that the renewed vigour and standard injected in operations as well as the collective resolve and improved civil-military relations would engender lasting peace and stability in the country.

The president reiterated that the provision of security to Nigerians would continue to receive premium attention by his administration, adding that deliberate actions are ongoing to provide the necessary support to enhance national security.

Additionally, is the acquisition of platforms for the Army Aviation which has been considered in the 2023 Budget.

This modernisation drive would be vigorously sustained as efforts are also being made to reform our indigenous military industrial complex, through partnership with our allies.

I am optimistic that this objective will be achieved soon to make us self-reliant in meeting our defence needs.

Buhari further urged the military to maintain the tempo in all theatres and double efforts in information gathering to comprehensively defeat all forms of security threats facing the nation.

Speaking earlier in his remarks, the Chief of Army Staff, Lt. General Faruk Yahaya,  assured that the Nigerian Army would remain apolitical during the polls.

He promised that the Nigerian Army would build upon the success recorded during the recent governorship elections in Osun, Ekiti and Anambra states.

While commending Buhari for his support to its operations over the years, the army chief reassured the president and the citizens of the country of continuous loyalty to the Constitution of the Federal Republic of Nigeria.

He said the Buhari-led administration had done more than enough in assisting the security agencies especially the Nigerian Army in its fight to restore peace and tranquility to every part of the country, especially the North-East and the North-West.