Late goals from Ritsu Doan and Takuma Asano who play in the German Bundesliga ensured that the Japanese got off to a winning start in Qatar.

This is the second upset that one of the tournament favourites would be experiencing since the 2022 world cup tournament kicked off.

It would be recalled that Argentina lost 2-1 to Japan’s Asian neighours, Saudi Arabia a day earlier.

Before the Group E encounter kicked off, German players subtly protested FIFA’s decision to disallow captains from wearing a ‘OneLove’ band to campaign for the LGBTQ+ community and fairness in the sport.

ALSO READ: Ronaldo Will Not Demonstrate; For LGBTQ+ Community At FIFA World Cup

Specifically, Germany’s players protested FIFA’s decision to ban Manuel Neuer from wearing the OneLove armband by covering their mouths ahead of their World Cup opener, as the team declared: “Denying us the armband is the same as denying us a voice.” 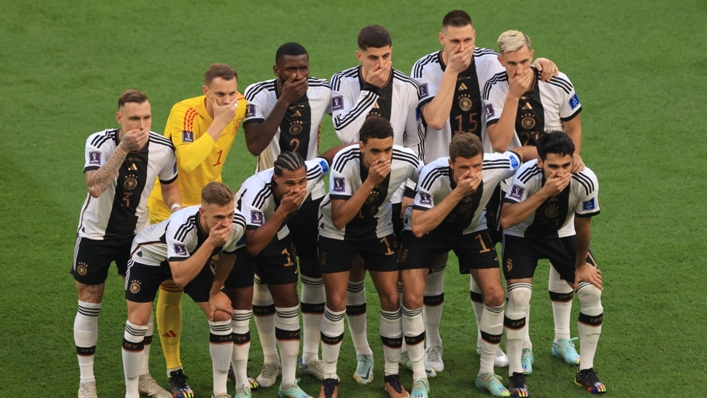 Hansi Flick‘s side then squandered several golden opportunities to put the game to bed before Freiburg forward Doan made them pay from a rebound 15 minutes from time.

With Germany chasing a winner, there was to be one final twist as Asano raced onto a long ball before firing beyond Neuer, leaving Die Mannschaft under huge pressure ahead of Sunday’s meeting with Spain.

Germany were saved by the offside flag when Daizen Maeda prodded Daichi Kamada‘s early cross home, but Japan were masters of their own downfall when Flick‘s team went ahead after 33 minutes.

A VAR review denied Germany a second as Kai Havertz tapped home from an offside position after Gonda saved from Joshua Kimmich, before Gundogan hit the base of the post after the restart.

Gonda denied Gnabry three times in quick succession as Germany continued to create chances, but Japan stunned them at the other end as Doan capitalized on a rebound to fire into the roof of the net.

Japan completed the turnaround with seven minutes left as Niklas Sule‘s woeful positioning allowed Asano to stay onside from a long ball, and he hammered beyond Neuer to seal a famous win.

Chinko Ekun Opines ‘Education Is Not The Yardstick To Success’