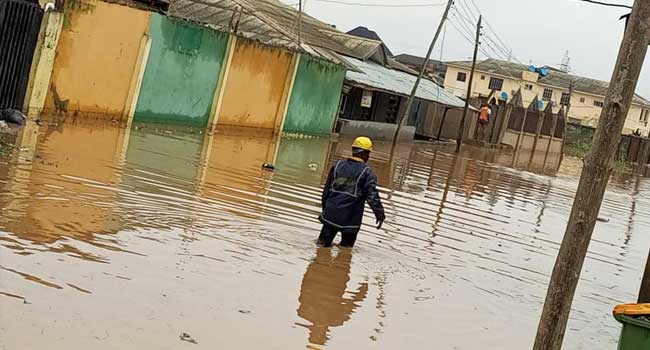 The Lagos Government has disclosed that the recent floods in the country is not affecting the state due to its proactiveness and investments in the drainage system.

This is according to the Lagos State Information and Strategy Commission Gbenga Omotosho. He listed several places in and outside of Nigeria where floods have killed many and displaced millions.

But in Lagos, you don’t have this kind of situation because we have a goverment that is proactive and due to the kind of investment we have made in our drainage system which is working; in cleaning our drains,

According to the Commissioner, the Lagos State Government has also issued early warnings to residents of flood-prone areas.

About three times, we have said to the media that people should prepare because the weather man said that Lagos is going to experience more rains,

But fortunately because of the preparations we have made, we have not seen the kind of flooding we have seen in other places. What you see in Lagos are flash floods.

So, it is alot of what we have done; a lot of investments that we have made.

Since the floods started, more than 600 people are now known to have perished in the worst floods.

The disaster had also forced more than 1.3 million from their homes, said a statement by the ministry of humanitarian affairs, released on Twitter.

The previous toll from last week stood at 500, but the numbers had risen in part because some state governments had not prepared for the floods, said the minister.

While the rainy season usually begins around June, the rainfall had been particuarly heavy since August, said the National Emergency Management Agency (NEMA).

Sub-Saharan Africa is disproportionately affected by climate change and many of its economies are already struggling from ripple effects of the Russia-Ukraine war.

Rice producers have warned that the devastating floods could impact prices in the country of some 200 million people where rice imports are banned to stimulate local production.

The World Food Programme and the UN’s Food and Agriculture Organization said last month that Nigeria was among six countries facing a high risk of catastrophic levels of hunger.

FG Calls For Establishment Of Local Emergency Committees To…