Cameroon Prime Minister Asks Villagers, 40,000 Displaced By Boko Haram Back To Their Base 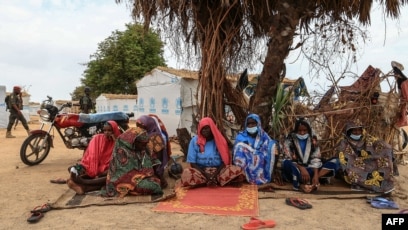 Cameroon’s Defense Minister has disclosed that it is safe for 40,000 villagers displaced by the militant group Boko Haram near the borders with Chad and Nigeria to return home. But villagers say they first need food aid as the fighting forced them to abandon their farms and livestock.

Cameroon military officials, led by Defense Minister Joseph Beti Assomo, told workers at Maroua’s military hospital that the government will foot the bills of all troops injured in battles against the Nigerian terrorist group Boko Haram.

Among the injured soldiers is 31-year-old Damien Ekelle, who lost his left leg in a September 13 battle with Boko Haram fighters in Mayo Tsanaga, an administrative unit on Cameroon’s northern border with Nigeria and Chad.

Ekelle said he is grateful that Cameroon’s defense minister and his delegation visited injured soldiers to have an appraisal of the challenges government troops encounter while fighting Boko Haram terrorists. He also said he is thankful to God for saving his life.

The government said there are less than 30 injured government troops in the hospital, down from 60 in June.

In June, Cameroon said it deployed hundreds of troops along its border with Nigeria, especially in Mayo Tsanaga, after attacks by Boko Haram militants forced more than 40,000 villagers to flee the area.

Government officials said the troops were deployed after villagers organized daily protests in front of government offices demanding protection from the military.

After visiting Mayo Tsanaga and the injured soldiers in Maroua this week, Defense Minister Assomo assured villagers that it is safe to return home.

Assomo said threats by the terrorist group Boko Haram have greatly diminished the sporadic attacks that the military is stopping. He said President Paul Biya is happy that the military has greatly reduced the ability of Boko Haram fighters to strike innocent civilians and government troops have maintained Cameroon’s territorial integrity that was threatened by Boko Haram.

The government says about 10,000 villagers have returned within the past month.

But some locals remain reluctant to go home. They say if they return, they will lack food since farms and cattle ranches were abandoned in June when the fighting was intensive.

The government said, in addition to ensuring security, it will provide planting seeds to villagers who agree to return.

Boko Haram has been fighting since 2009 to create an Islamic caliphate in northeast Nigeria and parts of Cameroon, Chad, Niger and Benin.

The violence has cost the lives of tens of thousands of people and displaced about 2 million civilians.