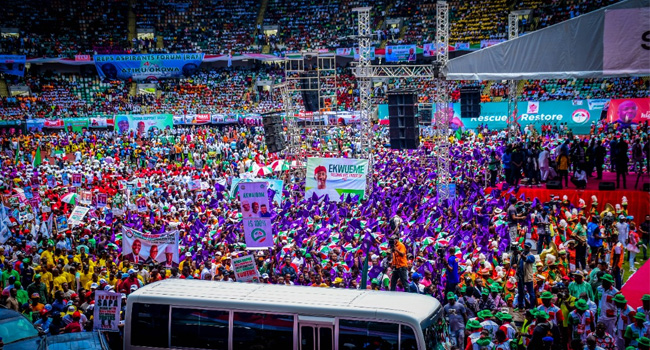 As the 2023 general elections is approaching, the Peoples Democratic Party (PDP) has flagged off its presidential campaign in Akwa Ibom State.

The event is taking place at the Nest of Champions Stadium in Uyo, the state capital, barely four months before the February 25 presidential election.

Taking to his Twitter handle, Atiku shared some images indicating that he arrived in Uyo last night. Expressing his joy being in Akwa Ibom State, the ex-vice president was accompanied by Okowa, Emmanuel and Mohammed.

The crisis rocking the PDP took a different dimension after Wike lost to Atiku in the PDP presidential primary.

Several talks to pacify the Wike camp appear to have hit the wall as the aggrieved governor has shunned the party’s activities, indicating that he won’t support Atiku’s presidential ambition.

Campaigns for the 2023 general election officially commenced on 28 September in line with the timetable and schedule of activities of the Independent National Electoral Commission (INEC).