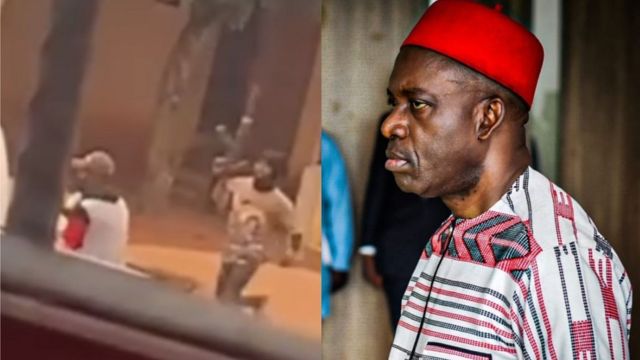 Governor Charles Soludo of Anambra has stated that gunmen no longer have the capacity to carry out deadly attacks as usual in the state.

Soludo, a professor of economics and former governor of the Central Bank of Nigeria (CBN), stated this while assessing the government’s performance since he assumed office as the state’s Chief Security Officer.

He told Channels Television on Sunday, September 18, the present administration in Anambra has successfully brought the security threats in the state to the lowest level.

Read Also: Police Reveals Citizen Must Not Retaliate If Officer Slaps Them

The Governor said during his appearance on Channels Television’s Sunday Politics;

Giving where things were when we came, we are not saying that Anambra is 100% secured … but everybody in Anambra – the 8.5 million residents of Anambra can testify to you that insecurity in Anambra has come down to the barest minimum

Fifteen camps (run by gunmen) here (have been) decimated. Even yesterday (Saturday), some other places (where) they were gathering were decimated; we have degraded their infrastructure and I don’t think they have the capacity again to come with the kind of ferocity they had in the past.

Before Professor Soludo took over the leadership mantle in the state, residents of Anambra have been living in fear as hardly would a week pass by without the report of an attack.

In most cases, the assailants target police facilities and offices of the Independent National Electoral Commission (INEC), among other government properties in the state.

Most of the attacks have been linked to members of the proscribed Indigenous People of Biafra (IPOB) and its militant wing, the Eastern Security Network (ESN).

Governor Soludo, who insisted that the security situation has greatly improved, attributed the feat to the efforts of the security forces.

He thanked the security forces and the vigilante groups for their gallantry, as well as the residents for their cooperation in curbing crimes in the state.

Anambra has been relatively quiet and peaceful, and we are pursuing this agenda.

I would dare to say that if we were to have the statistics over the last three months, I think Anambra will compare favourably as one of the safest comparatively.