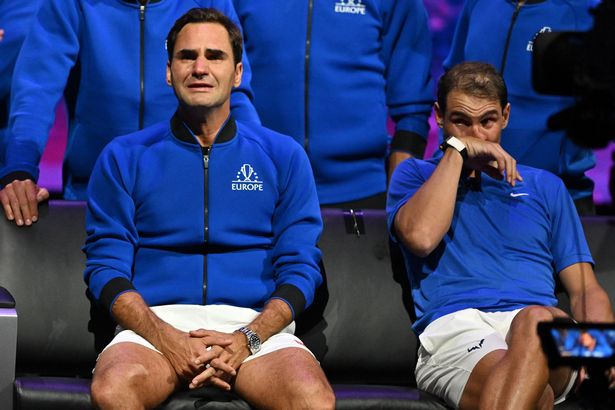 Rafael Nadal broke down in tears for his great rival and friend Roger Federer as the Swiss Maestro bid farewell to the sport of tennis. The pair teamed up to take on Jack Sock and Frances Tiafoe in the Laver Cup last night and the four players produced a match for the ages.

Roared on by a passionate crowd at London’s O2 Arena, in his last ever professional match, Federer produced some vintage shots as he battled alongside his pal for one last time. However, the iconic duo just fell short by a scoreline of 6-4, 6-7(2), 9-11 and, soon, the tears began to flow.

Read Also: Why Is Sports Betting And Casino Gambling On The Rise In Africa

Federer sobbed as he was congratulated by Team Europe at the end of the pulsating encounter, and the camera soon cut to the Spaniard who was also caught up in the emotions of a truly special evening. Nadal wept as they embraced one another in the middle of the court and the 20-time major winner shared a moment with the rest of the players from both teams.

Then, in arguably the most moving visual in the history of tennis, both Federer and Nadal were sat next to one another courtside as they continued to cry while two-time BRIT Award winner Ellie Goulding performed. It is rare that two competitors who engaged in such a fierce rivalry, which raised the levels of their sport in the process, would prove to be such great friends throughout.

The respect and admiration the pair have for each other is clear to see and Federer choosing to end his illustrious career alongside his pal and greatest rival was very fitting.

With Roger leaving the tour, yeah, an important part of my life is leaving too because all the moments that he has been next or in front of me.

So [it’s] been emotional to see the family, to see all the people.

While the two have different styles of play, their relationship off the court is one of a kind.

Our styles make our matches and our rivalry probably one of the biggest and most interesting.

I think every year, the personal relationship gets better and better. … It’s something very beautiful after all the things that we shared together and all the important things that we [fought] for such a long time.

After a sensational 24-year year career, Federer has now bowed out from the sport as arguably its greatest ever player and gave one of the most emotional on court interviews likely to be seen as he thanked his colleagues and loved ones.

It’s been a wonderful day. I’m happy, not sad. It feels great to be here. I’m happy I made it through.

It’s been the perfect journey. I’d do it all again. Everyone’s here, the boys and girls. My wife has been so supportive. She could have stopped me a long, long time ago but she didn’t. She kept me going and allowed me to play, so it’s amazing – thank you.

Being with the guys and having family and friends, I didn’t feel the stress so much even if I felt something would go during the match. I am so glad I made it through and the match was great. I couldn’t be happier.

Rafael Nadal Tests Positive For COVID-19 In Latest Blow For…