Since the albums surfaced on streaming platforms, it made an immediate impact. To describe the album simply, it is a music project that is succinct, intentional and profoundly done.

No time wasting, for it’s intentionality, the 12-track album is propounded within 30-minutes. Listeners could sit back, relax and play the project twice within an hour.

Also, each single doesn’t exceed the 3-minute mark. The singer said what he had to say without boring the listeners with unnecessary details about his background narrative, pursuit and emergence into mainstream prominence.

This execution aided the popularity and would aid the album in amassing impressive numbers on music streaming platforms.

No doubt, Asake will be amassing awards in 2023, as a matter of fact, he will probably headline majority of the concerts and shows in the latter part of this year.

Prior to discussing the theme of Mr Money With The Vibe, let’s understand the similarities between YBNL founder and rapper, Olamide and Asake.

Although not every YBNL signee turned out to amass millions of streams on Spotify and Audiomack, Asake is making sure his name doesn’t fizzle out before he attains his peak.

Putting In The Work…

The aim of the EP was to introduce Nigerians to the artiste known as Asake and to also unravel his skillset, talent and credibility. There was no other ideal time than now to introduce the Nigerian populace to an artiste who is not only an Afrobeat musician but also a choreographer, lyricist and fashionista.

Gradually, he took over the entertainment space, making headlines and becoming one of the notable musicians of the year.

As a matter of fact, his performance at the 2022 Headies Award was the most talked about.

Read about his performance here.

It is no longer news that Asake has the music charts on lock, at least for the time being. His music album, Mr Money With The Vibe has been dissected and revisited by music lovers, some have even described it as the music project of the year.

Is the album actually really that special?

It is Asake‘s debut studio album, therefore, it is an important project to him. This album is an embodiment of his struggles, turmoil, victory, losses, and most importantly, his essence as a person.

Once again, it is special to him.

Asake has done well for himself, every single he released this year has somehow found it’s way to the top of the Nigerian music charts. Incredible, this feet isn’t for everyone.

In the era of Burna Boy‘s ‘last last‘ and Kizz Daniel‘s ‘Buga’, Asake, a 27-year-old seemingly new musician found a way to put his name on everyone’s lips. Applauds to Mr Money.

Asake: Mr Money With The Vibe

The album opened with ‘Dull‘, composed in Yoruba language. Talking about what where he is coming from, the panegyric-esque single sees Asake reveal he is not prepared to disappoint his parents and has dreams that he wants to achieve.

‘Dull’ aesthetically transitions into track two, ‘Terminator‘. The single was released a couple of weeks ago and it has been doing well on the music tracks.

‘Organize‘ was released on the same day as the album. This is an interesting single that would definitely go on to become a banger at night clubs, parties and for individuals who enjoy to cruise.

On this track, Asake seem to be addressing individuals who can be condescending with their ‘wisdom’.

Sharing a snippet of the single on his Instagram, Ololade wrote, “some of us are wise, every other person overwise.”

The follow up track on the album is the renowned single, ‘Peace, Be Unto You‘. This is easily one of the most notable works from Asake yet, the chorus is catchy and the beat is hypnotic.

As at the time of this publication, this single has amassed almost 8 million listens on the music streaming platform, Spotify. The music video has also garnered 12 million views on YouTube.

‘Dupe‘ which means ‘be thankful’ is a reflective song on showing gratitude on how far someone has come.

Asake was admonishing his listeners to be thankful for how far they have come, also, they should not forget to enjoy the works of their hands. A song that could be played at worship centers.

More Danceable Jams On Mr Money With The Vibe 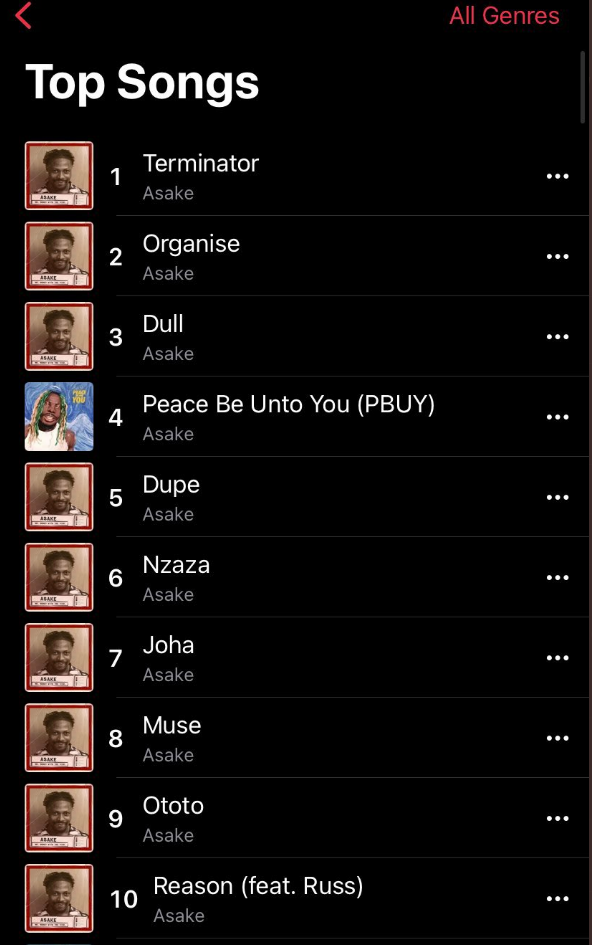 ‘Muse‘ is more or less a love song about Asake and his lover. It is about romance, intimacy and getting to enjoy the warmth of coitus. Aside from the introductory single, ‘Dull‘, ‘Muse‘ is the shortest song on the album.

The next three singles, ‘Nzaza‘, ‘Ototo‘ and ‘Reason‘ have similar themes. It’s about struggle and embarking on the voyage of self-discovery.

For ‘Nzaza‘, Asake spoke about what he has been through as an individual. As an average individual who is struggling to make ends meet on the streets of the country, the self-acclaimed Mr Money disclosed some of the battles he had to overcome prior to achieving his dreams.

‘Ototo‘ simply describes our individual journey, struggles and the strength to undergo these unique battles. Indeed, each individual has a battle to fight and a scar to remind them of whatever they have been through.

‘Sunmomi‘ means ‘come close to me’ in Yoruba language. This is a feel-good, high energy song. It is about vibes and gyrating to the beats.

Of course, ‘Sungba‘ featuring Grammy award winner, Burna Boy is the biggest track off the album. The track was kept as a concluding single to give listeners an enthralling reason to listen to the project one more time. Afterall, the album is succinct, therefore, why shouldn’t I listen to it once again?

YBNL‘s intelligence helped to carve this music project to perfection. Despite releasing tracks weekly, never did it seem like Asake was shoving his music down the throats of Nigerians and lovers of his music across the globe.

The project served it’s purpose and never for ones did Asake lose his identity or voice on this project.

It has replay value and would definitely receive airplay in different sect. Also, there is a need to mention that the music producer, Magic Sticks did very well on this album.

However, Asake must endeavor to move forward from the Ampiano style of music. Most of the songs on the album song alike, hence, his audience would eventually outgrow this style of music and inevitably go for something more.

The direction he should embark upon is best known to him and his record label. There is still so much work to be done, this is just the beginning and he has several sphere to cover.

His labelmate, Fireboy DML has continued to refine himself and has since gone on to release three impressive studio albums, including the latest, Play Boy.

In the end, this is a remarkable work from Ololade Mi Asake, the world is ready to listen to him.

Fashola Urges Politicians For Calm Ahead Of 2023 Elections