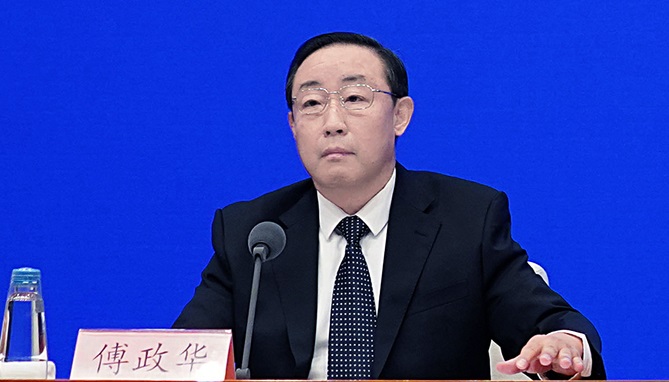 A former justice minister who led prominent bribery investigations throughout his term was sentenced to death on Thursday, September 22, in China with a two-year reprieve for accepting bribes and “breaking the law for personal benefits.”

President Xi Jinping’s persistent focus on “taking out the tigers” of corruption as part of the anti-graft campaign he started a decade ago is evident in the indictment of Fu, which came weeks before the crucial Communist Party of China (CPC) meeting in October.

As vice-minister, Fu was in charge of a high-profile corruption investigation into Zhou Yonkang, who was himself China’s top security official and retired as a member of the Communist party’s politburo standing committee, the country’s top decision-making body; Zhou received a life sentence in jail for corruption in 2015.

Fu, who became justice minister in 2018, was a rising star until corruption charges brought him down in 2021.

State-run China Daily said in a report on him on Thursday;

Fu, former deputy head of the Committee on Social and Legal Affairs of the National Committee of the Chinese People’s Political Consultative Conference (after his tenure as justice minister), was accused of bribe-taking and bending the law for personal gains.

The court in Jilin was told by prosecutors that Fu took advantage of his position to seek gains for others regarding business operations, official positions, and legal cases.

He is said to have illegally received “money and gifts worth 117 million yuan ($17.3 million) either directly or through his relatives,” the court was told.

In July when the court case began, prosecutors said;

During his tenure at the Beijing Municipal Public Security Bureau, Fu purposefully shielded his brother, who had severely breached the law, from criminal prosecution.

Earlier reports from China’s anti-corruption watchdog, the Central Commission for Discipline Inspection (CCDI), claimed that Fu had also joined the “political gang” of Sun Lijun, a former vice-minister of public security who was removed from office and put on trial in 2021 for bribery, stock market manipulation, and illegal gun possession.

Fu had admitted guilt and shown regret in his final speech before the court in July.

A death sentence with a reprieve in Chinese law typically signifies that, based on the defendant’s behaviour, the sentence could be commuted to a life sentence at the conclusion of the two-year term.

One of President Xi Jinping’s most well-known efforts, the ten-year anti-corruption push has also been used to get rid of rivals and disloyal individuals, according to China watchers.

Xi had identified “corruption” as one of the primary “pressing issues” China faced when he took over as the general secretary of the Communist Party of China (CPC) in November 2012.