Grammy award winning musician, Burna Boy has made a snide remark about his Afrobeat colleague, Wizkid on the social media platform, Twitter.

For the second time in two weeks, Burna Boy whose real name is Damini Ogulu insinuated that he is a better artiste than his colleague and fellow Afrobeat icon, Wizkid.

It would be recalled that he called fans of the Star Boy entertainment founder, delusional.

In his now deleted series of tweets published on Wednesday afternoon, the self-acclaimed African Giant wrote, “If Wizkid wasn’t my guy, I’d have punched him in the face on sight so his Twitter jokers realize I’m not Davido” 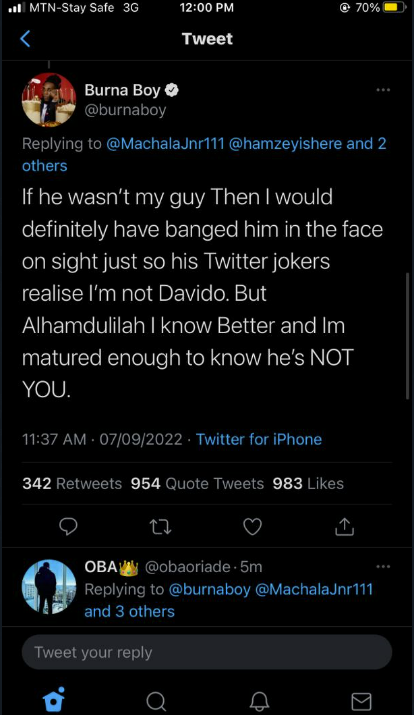 What Led To Burna’s Outburst?

The Grammy award winner was dragged into the conversation with Wizkid‘s fanbase, the infamous Wizkid FC on Wednesday afternoon after he disclosed some of his achievements on Twitter.

Characteristically, the singer became livid at the incessant comparison with Wizkid and decided to claim that he is a much better artiste than his colleague. Also, he mentioned that “he is the first Nigerian-born solo musician” to win a Grammy award.

The singer also subtly berated Davido, another Afrobeat musician in his post.

Read the exchange below.

Read the exchange between Burna and the fans below. 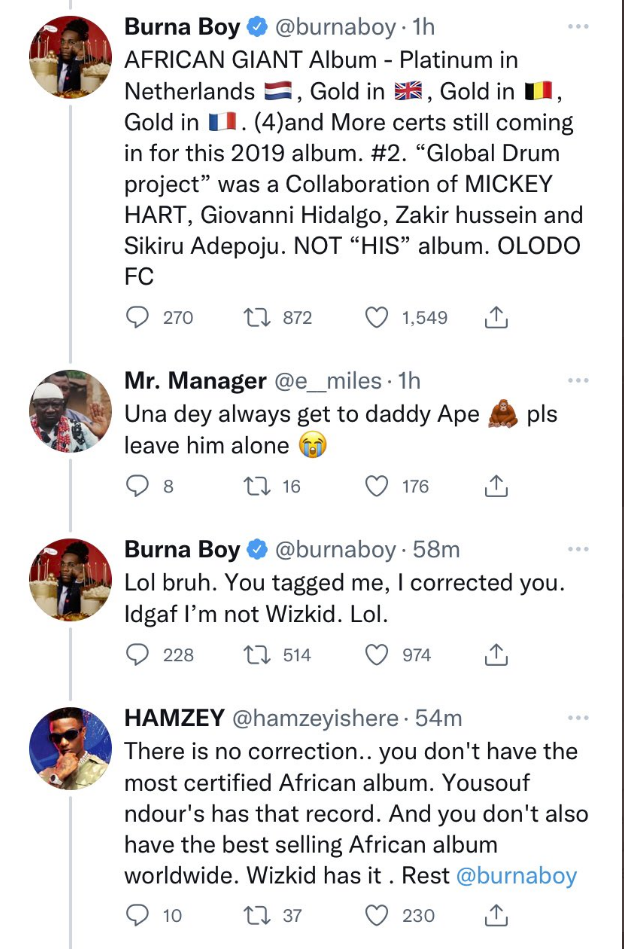 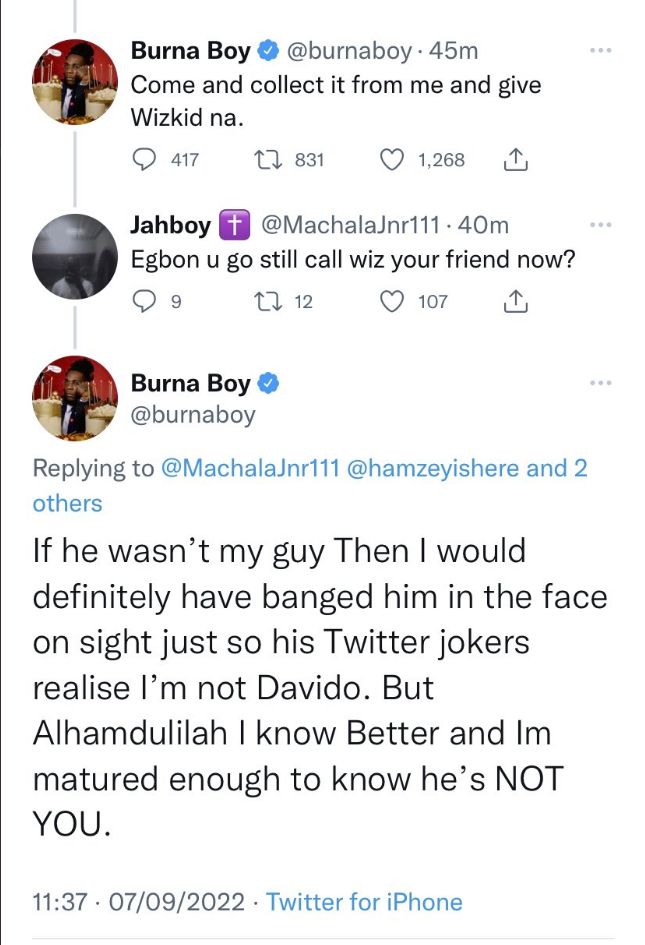 As at the time of this post, Wizkid has not reacted to the statement shared by his colleague on social media.

Here is what they have to say.

Davido had a better friendship with Wizkid than the kind of friendship that exists between him and Burna boy right now.

wizkid will never dare reply burna boy, why?! because burna boy is not who you can bully & get away with it easily, not even because wizkid is as “matured” as he claims, burna boy isn’t reekado banks or dammy krane.

burna boy is him. fuck fake friendships, it’s real as it gets!

You can’t call me your guy and watch ur fans disrespect me. Talk ur shit, Burna Boy!

Burna boy’s friendship with Wizkid is too toxic and a BIG red flag. The sooner Wizkid cuts him off, the better.

I hope Burna boy knows the consequence of banging Wizkid's face right? Soboma might have a partner if he tries that. I hope he knows this!!

Insecurity is written all over that Burna Boy’s tweets. He must have plenty of free time in his hand to be posting stats himself. He needs to rest fr! Let fans be fans 😂

Because of common online trolls o 🤣

Burna Boy threatened to beat Wizkid because of his fans, apparently he said he’s not as cool headed like Davido, Burna boy is a bully, I’ll forever stan and respect Davido, very decent man.

Burnaboy believes fans of the other two in the top 3 are toxic, and he would have ‘decked’ Wizkid if they weren’t friends. This because of the behavior of faceless people on twitter.

Who is going to tell him about his own fans? Has he ever addressed their toxicity?

Burna Boy makes great music but his attitude is not good 👍

It's funny how Burna boy is always dragging Wizkid and Davido but he dare not carry that energy to Olamide side. Cos werey dey also get master e dey fear.

So burna boy self need davido name to trend for twitter😌 🤣🤣
I no my 🐐 pic.twitter.com/fwG1wrCp4e

“If you knew half the shit I used to do for money, risking my freedom daily, you would be way happier for me”

Burna Boy your story is touching and we perfectly understand all your struggles! Na man you be. Atlantic Una do this one. Oya nah 🥴

Deep down, irrespective of whatever Burna Boy says on this app most people will still drag him

Generally there’s no “Love” for him