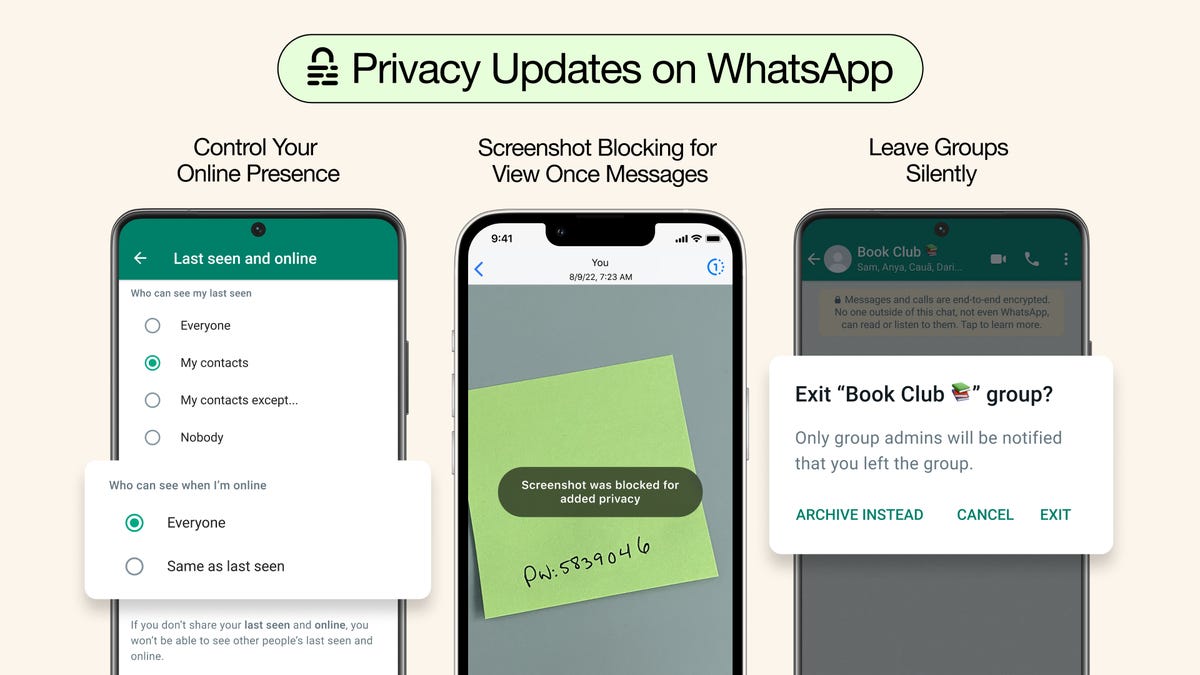 Users will be able to leave group chats silently, control who can see their online status and block screenshots on View Once messages.

The View Once feature automatically deletes a picture or video after the recipient has opened it.

The aim is to eventually make WhatsApp “as private and secure as face-to-face conversations,” Meta CEO Mark Zuckerberg said in a Facebook post, on Tuesday, August 9.

The new “online presence control” feature allows you to send messages while appearing to be offline. That offers another level of privacy over the ability to hide your “last seen” status from specific contacts, a feature introduced earlier this year.

WhatsApp is also testing screenshot blocking for view once messages that disappear after a single view. When those messages were introduced last year, Meta said that you should still take caution as you wouldn’t know if someone screenshotted them. A new feature that lets you block such screenshots is now in testing, but the company hopes to get it to all users “soon.”

With the final change, you can leave leave groups privately without sending out a mass notification to everyone else that you’re gone — though group admins will still be notified. That should save some awkwardness when it rolls out to the desktop and mobile apps, also later this month.

The popular messaging app currently alerts all members of a group chat to someone leaving or being removed by default.

And while there are ways to disable this for individual group chats, the option to leave silently is not presented to users when they choose to “exit group” – sometimes causing awkwardness, embarrassment or drama for those trying to leave unnoticed.

But now, they will be able to leave without notifying all other group chat users, only group admins.

Product head Ami Vora said it was part of the platform’s focus on “building product features that empower people to have more control and privacy over their messages”.

We believe WhatsApp is the most secure place to have a private conversation.

No other global messaging service at this scale provides this level of security for their users’ messages, media, voice messages, video calls, and chat back-ups.

This will also see users given the option to allow only certain contacts – or no-one – to see when they are active on the platform, bringing online status options into alignment with “last seen” settings.