Week In View: NBC Hilarious Sanction, FG Appeal To Parents, And Other Stories 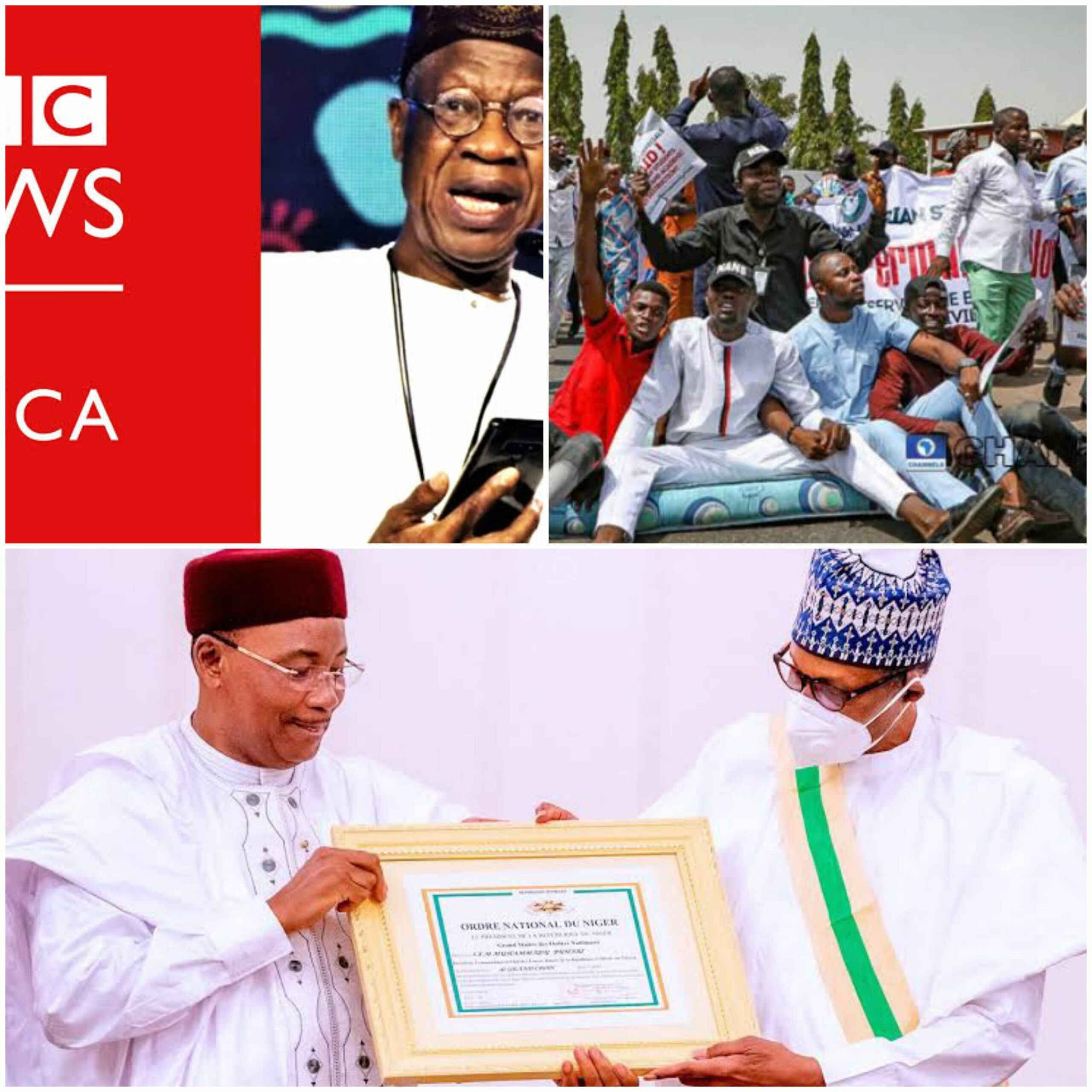 The penalty was imposed over the broadcast of a documentary titled “Nigeria’s Banditry: The Inside Story”, which was aired on the 5th of March, 2022.

The NBC letter to the company dated August 3, 2022, was signed by the Director General, Balarabe Shehu Illela.

According to the agency, the documentary, which chronicled terrorist activities, contravened sections of the National Broadcasting Code.

It is laughable, amidst the spiralling insecurity and thousands of lives lost, for the NBC to sanction the stations which aired the documentaries detailing the activities and motives of the bandits.

While the concerns about glamourisation of the criminals are valid, the FG should ensure more proactiveness towards tackling the menace rather than gag the media who seek to expose the truth.

The presidency on Saturday urged parents to join the Federal Government in begging the Academic Staff Union of Universities (ASUU) to suspend its ongoing strike.

The Senior Special Assistant on Media and Publicity to the president, Garba Shehu, made the call during the 11th graduation ceremony of Glisten International Academy in Abuja.

The presidential aide’s call came just 24 hours after the Minister of State for Labour and Employment, Festus Keyamo, appealed to parents to beg ASUU to suspend the strike.

I want to advise parents to join the government in begging ASUU to end this strike, as the government is doing its part and parents are worried and they should start talking to ASUU.

The truth is that Nigeria is broke and while ASUU’d demands are valid and based on a pre-existing agreement signed in 2009, the existing global realities means those demands cannot be fulfilled by the President Muhammadu Buhari’s administration.

This informed the appeal to parents in order to assuage the anger of the striking union — who knows? Their heart strings might be tugged in order to reach a reasonable compromise, as students languish in uncertainty.

The Governor of Lagos State, Babajide Sanwo-Olu, on Friday urged the people of the state to disregard reports on planned terror attack in the state.

The National Security and Civil Defence Corps (NSCDC) had last month alerted Nigerians of a plan by terrorists to attack Lagos, Kaduna, Abuja and three other states in the Northern part of the country.

The governor, who addressed journalists after a meeting with heads of security agencies at the State House in Marina, assured the people of Lagos that adequate measures had been put in place to protect lives and property in the state.

In the last couple of days or weeks, there have been a lot of social media news and information about the threat of impending attacks on Lagos. I have had on a daily basis security communication with my security operatives.

We want to assure you we are not unaware of all the concerns that have gone round. The security operatives have given all the assurances to continue to make Lagos safe for all.

A well-known aphorism goes like this (I paraphrase): If the government says something, believe the opposite — this means Lagosians should not trivialize the terrorist threat, despite assurance by the state government appealing for calm.

As the commercial epicentre of the country, all hands must be on deck to forestall any attack on the city, lest the country will be further mired in economic ruins.

The Federal Government on Wednesday confirmed the purchase of 10 vehicles worth N1.15 billion for the Republic of Niger.

A report emerged earlier on Wednesday that President Muhammadu Buhari had last month approved N1.15billion for the purchase of 10 SUVs from Kaura Motors Nigeria Limited to be supplied to the Nigerien government.

The Minister of Finance, Budget and National Planning, Zainab Ahmed, who confirmed the development to State House correspondents at the end of the Federal Executive Council (FEC) in Abuja, said it was not the first time Nigeria was supporting its West African neighbours.

She said the support was to enable the Nigerien government to tackle insecurity in the landlocked nation.

Considering the influx of cross-border terrorists who seek to inflict chaos on the Nigerian populace, this act by the Federal Government holds some weight towards ensuring regional stability in the fight against insecurity.

Nonetheless, there is a need for the FG to be more transparent while engaging the media regarding its mandate; this is to forestall any backlash that might result from misunderstanding of well-intentioned policies.

The former National Chairman of the All Progressives Congress (APC), Adams Oshiomhole, has absolved the party’s presidential candidate, Asiwaju Bola Ahmed Tinubu, of the blame on the performance of President Muhammadu Buhari’s administration.

Oshiomhole, who featured in a programme on Arise TV, stressed that it would be unfair to blame the former Lagos State governor for Buhari’s performance because he never held any position in the government

You can’t say someone who never in any way participated in government should be credited with the outcome of government policies or be blamed either way.

It is a fact that Asiwaju by himself said, yes, he co-founded the APC. He never held any position in government and didn’t carry out a contract on behalf of the government. So how can you credit him either way? This is just being fair.

It is just dirty politics, attributing the failures (and successes) of the President Muhammadu Buhari’s administration to Bola Tinubu, despite the huge role played by the former Lagos State Governor in the emergence of the current administration in 2015.

However, the anger of Nigerians is understandable considering the state of the economy and anyone affiliated with the administration is being scapegoated ahead of the 2023 elections — the next President has a huge task on their hands (coincidentally, Tinubu is one of the frontline contestants). We wait.