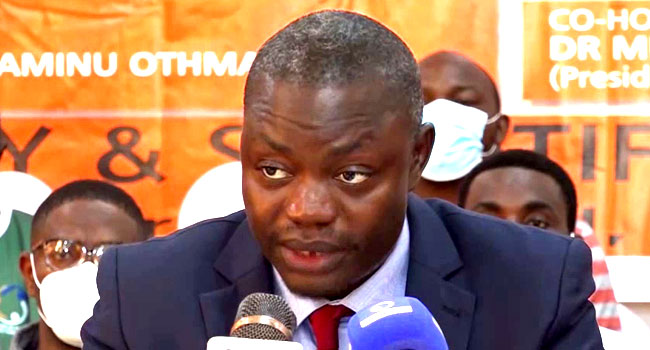 The President, National Association of Resident Doctors (NARD), Dr Dare Ishaya, has asked the Federal Government to implement the payment of the new Hazard Allowance and arrears stipulated as of Dec. 22, 2021.

Ishaya said this in an interview with the News Agency of Nigeria (NAN) on Sunday, July 31.

According to him, the allowance is contained in the circular issued by National Salaries, Income and Wages Commission (NSIWC) dated Dec. 22, 2021, with reference number SWC/S/04/S.218/11/406.

Ishaya said that the National Executive Council (NEC) of the association at its meeting and scientific conference which ended on Saturday, decided to present the Federal Government with a two-week notice to implement the circular.

The two weeks take effect from Aug. 1 to Aug. 14, after which the doctors would convey another meeting and decide on what to do to drive home their demands.

He also said that a communique was issued at the end of the conference which also stipulated other demands the association wanted to be met.

Also our medical training is just a function of the Duty Tour Allowance because just like any other person who goes out to represent the government, it is the same thing with us.

Moreso, it has already been issued in circulars and others have started enjoying it, why can’t it be implemented for us?

So when NEC deliberated over all these issues and considering the economic realities in the country, we felt that the government was not being serious in implementing those things they had issued circulars about.

That was why we issued the two weeks notice and if after the meeting nothing is done we will review the situation and take further actions for which nationwide industrial harmony may not be guaranteed.

Further Demands By The Doctors

In the communique, the doctors are also urging the Federal Government to expedite action on the payment of the newly reviewed Medical Residency Training Fund (MRTF) within two weeks.

This is to enable its members to meet up with the closing date of examination registration as advertised by the National Postgraduate Medical College of Nigeria (NPMCN).

It also urged the Federal Government to expedite action on the payment of the skipping arrears for 2014, 2015, and 2016 to deserving members as the patience of the association was waning concerning the matter.

NEC demands immediate payment of consequential adjustment of the minimum wage to our members who have been deprived of this benefit since it was implemented several years ago.

NEC demands an immediate review of the Consolidated Medical Salary Structure (CONMESS) and other related allowances given the current economic situation in the country.

It said this was also in line with the agreed terms from the previous Collective Bargaining Agreement (CBA) that it would be reviewed regularly.

The association also urged the Federal and all State Governments to look into the issue of assault on doctors and thoroughly investigate the ongoing cases and put measures to forestall future occurrences.

It also enjoined the Federal Government to take steps toward curtailing the brain drain in the health sector and find ways of eliminating all bureaucratic bottlenecks in the employment and replacement of resident doctors.

The doctors also called for an increase in funding of the healthcare sector in the country to the tune of 15 per cent budgetary allocation in line with the 2001 Abuja declaration for healthcare financing in Africa and global best practices.