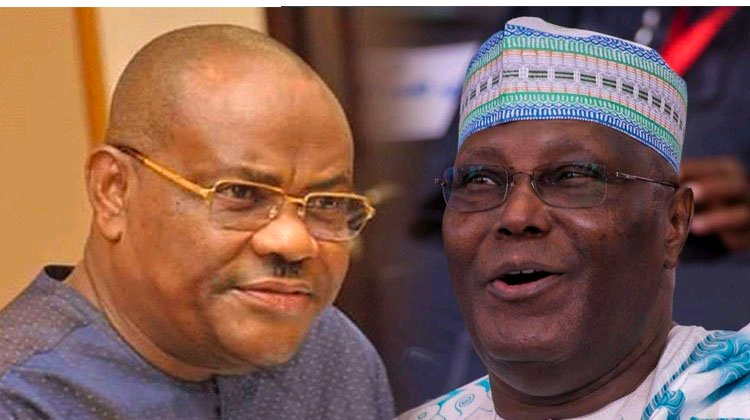 Over the rift between the Peoples Democratic Party, Atiku Abubakar and Governor of Rivers State, Nyesom Wike a committee has been set to settle every issues.

It will be recalled that Atiku’s delegation and Wike’s team had yet to decide on the venue of the meeting.

While sources in Wike’s team said the meeting would hold in Port Harcourt, a close associate of Atiku insisted that it would take place in Abuja.

A top member of Wike’s team, who spoke to one of our correspondents on Tuesday said the meeting, which was initially scheduled to hold on Monday did not materialise because some stakeholders from Atiku’s camp, who were crucial towards the reconciliation process, were absent.

The source, however, noted that the meeting had been rescheduled to hold on Friday in a bid to settle aggrieved parties in the interest of the PDP.

We were told that Governor Ahmadu Fintiri, who should have led members of the reconciliation committee in Atiku’s camp to the meeting, was the chief host during the defection of APC members in Yola. But they have indicated interest to show up for the meeting on Friday.

The source, however, noted that members of the reconciliation committee from Atiku’s camp would not be meeting the Rivers State governor.

According to the source:

When members of Atiku’s reconciliation committee come to Rivers State for the meeting, they will be meeting members of Wike’s committee. Whatever agreement that we reach would be detailed in a report that would be submitted to both Atiku and Wike.

After Atiku and Wike review the agreement and accept the conditions therein, another meeting involving Wike and Atiku will be held for the reconciliation to materialise in the interest of the party.

A reliable source in Atiku’s camp claimed that members of the reconciliation panel had agreed to hold the meeting in Abuja.

It was gathered that the meeting earlier scheduled for Monday could not take place following a disagreement over the venue.

The meeting was earlier billed to hold on Monday but it was shelved due to disagreement on the choice of venue. While Wike’s representatives on the panel wanted the meeting to hold in Port Harcourt,  the representatives of the PDP presidential candidate felt Port Harcourt is not an ideal location.  But now, both parties have resolved that Abuja is where the parley should hold and they have agreed to meet this Friday.

It was earlier reported that the rift between Atiku and Wike started after the Rivers State governor’s ambition of becoming the party’s vice-presidential candidate for the 2023 general elections failed following the emergence of the Delta State Governor, Ifeanyi Okowa, as Atiku’s running mate.