Davido Eulogizes Self In Comprehensive Note On IG

By Adekunle Fajana On Aug 14, 2022
0
Share
Nigerian recording artiste, David Adeleke who is better known as Davido has written about his establishment and progress in the music industry despite experiencing challenges.
In a lengthy post on his Instagram account on Saturday, Davido, one of the leading Afrobeat musicians in Nigeria published a note on his Instagram stories to reflect on his journey into superstardom.

Davido described the obstacles he had to overcome in the music business to reach his current position.

In his post, the singer observed how many scandals have been created about him and how much negative press there is about him.

He disclosed that despite being the youngest by age; he had repeatedly managed to resolve conflicts with those whom the media had turned against him.

He referred to himself as the only Nigerian artist who has been either compared to or formed against nearly every other successful and outstanding artist in the Nigerian music business.

ALSO READ: Papa Imade: Disguised; Davido Caught At McDonald By Fans In Amsterdam (Video)
He wrote:
“A lot of controversies have been set around this Legend and you almost never hear or read anything good about him on mainstream media outlets, a lot of tools have been put in place to discourage him and hold him back.“
Davido continued;

He is the only Nigerian artiste that almost every other successful and great artiste in the Nigerian music industry have either been compared to or formed against.
He has maned up several times to work things out with people the media have made his enemies despite being the little one by age.

Stood strong and held so many youngsters hands to success in the industry.

He continued;
“If not for this guy’s love for musical culture, if not for his devotion that he has for the people that support him, if he wasn’t born for this thing, he would have quit a long time ago.”
The concluding part of his post reads;

“This guy is Bigger in Size, Heart, Mind, Spiritually and in Talent more than we would ever imagine.

Heart Mind spirit is too strong!!!” 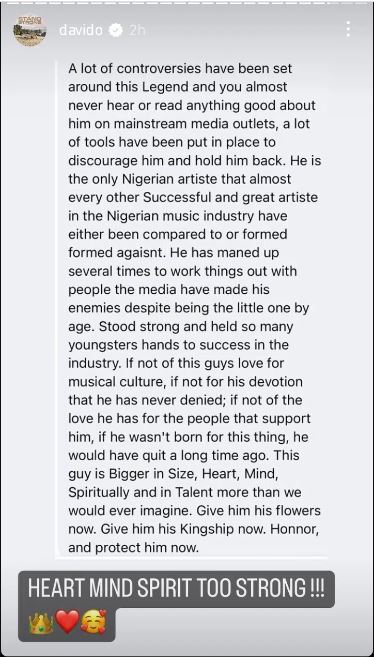 In an additional tweet, Davido hinted that he will be releasing his fourth studio album soon.

“I shall live long Amen! To receive all my blessings God has in store for me! And u guys already know my blessing nah OUR BLESSING!001! Album on the way… I’m inspired”. 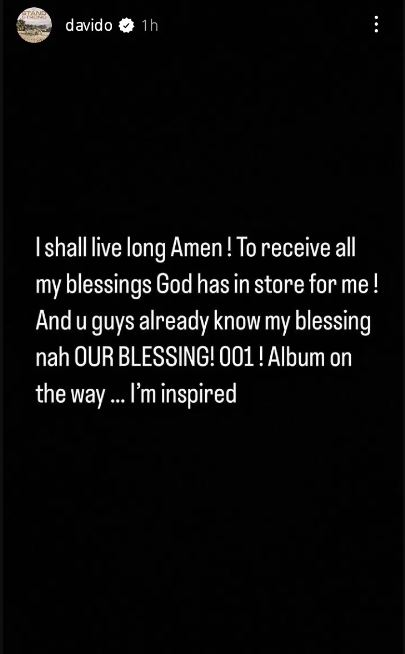