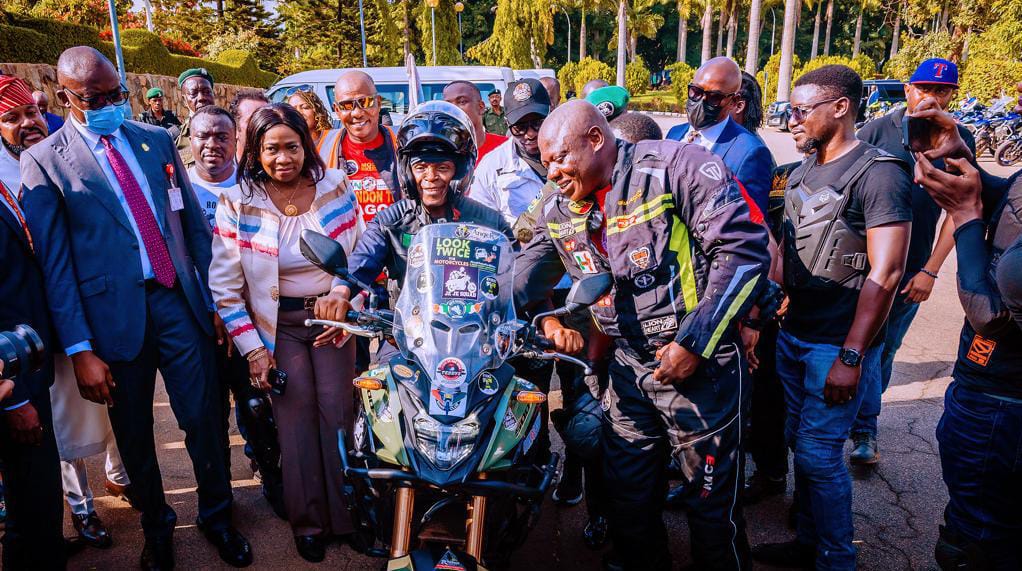 Vice President Yemi Osinbajo has noted there is need to continue the campaign against polio, adding that the disease is “very crafty.”

Osinbajo handed down the warning on Thursday at Presidential Villa, while receiving the Nigerian Biker, Kunle Adeyanju, who embarked on a polio-inspired charity ride from London to Lagos.

Adeyanju, who arrived in Lagos on May 29, was accompanied to the Presidential Villa by a retinue of bikers and members of the Rotary Club.

The vice president said he was pleased to receive Adeyanju on behalf of President Muhammadu Buhari, adding that a trip of 12,000 kilometres of uncertain terrain and 12 countries was no mean feat.

I am really also excited about the fact not only that you have done this for the adventure because I am told you are an adventurer; that you do sky diving, bungee jumping, cycling, all sorts of other adventures but more for a very worthy cause which is the Polio crusade.

And I must say to you that the whole polio campaign is one that we have taken quite seriously; the Federal Government of Nigeria, especially in the past couple of years, has taken it very seriously indeed which explains why now we have an end.

But I am sure the District Governor  will let you know; polio is a very crafty disease and I  think you have also pointed that out when you think you have conquered it, if you are not careful, if you are complacent, it will come back, very quickly; which is why we must keep a sustained attack against it.

Osinbajo said the National Economic Council (NEC) had also made polio one of the central public health issues.

According to him, NEC has a committee which deals with polio alone while the council also receives reports on polio from relevant agencies.

The World Health Organisation and several other Organisations, including local organisations, will come and give us a report of the status of the drive against polio in the country and so, it keeps us well-informed.

So, I think that this is an area where there is a lot of work and I really want to commend again the Rotary International, Rotary Club for all the work that they are doing.

I think that this is something that we must continue to support as well as other very significant public health issues.

On his part, Adeyanju said that the essence of adventure was  to communicate the polio message.

He said that though Africa had been certified polio free, the disease was rising again and continued to pose a threat.

Yes, Africa, we know that we are certified polio free because we have not recorded in Nigeria; Nigeria being the last country, just as the DG said earlier.

But because we have been certified polio free, we have become complacent.

And when people become complacent, we lose focus, quality drops and when quality drops, a surprise is just round the corner.

That is why we are beginning to see incidences of polio in Malawi and Cote d’Ivoire on June 16 and June 19,  declared two-day national immunisation days because they discovered polio.

NAFDAC Workers Insist On Continuation Of Strike, Till Needs Are Met