Uti Nwachukwu Reveals He Hasn’t Been To Church Since 2018

Nigerian media personality, Uti Nwachukwu has revealed on social media that he hasn’t been to church since 2018.

The Big Brother Africa winner made this known in a post on his Instagram stories after American preacher, Creflo Dollar distanced himself from his tithing teachings.

Earlier, Moji Delano reported that Creflo Dollar informed his congregation that failing to tithe opens the door for devourers to come in and destroy a person’s life.

The teachings that I have shared in the time past on the subject of tithing were not correct and today I stand in humility to correct somethings that I have taught for years and believed for years but could never understand it clearly because I have not yet been confronted with the gospel of grace which has made the difference.

I have no shame at all saying to you, throw away every book, tape and video I ever did on the subject of tithing..unless it alines with this

Reacting to Dollar’s statement, Nwachukwu mentioned in his post that he stayed away from church for several years primarily because preachers “use the spirit of fear to contain their congregation”.

The media personality also said that he’s been speaking against tithe, but instead gets attacked by African Christians because they want to “make money through miracles”.

“I’ve been saying this again and again!
But African Christians go attack me cause they want to make money through miracles.
Your pastor done talk am now!”

Read his full statement below. 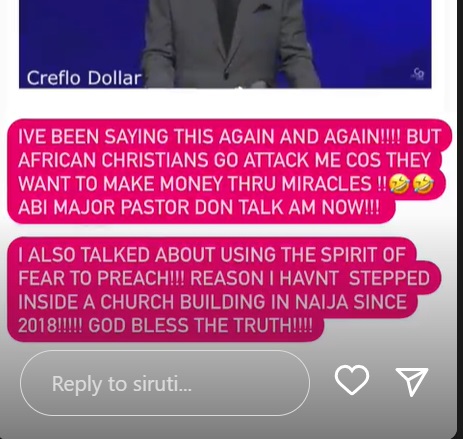