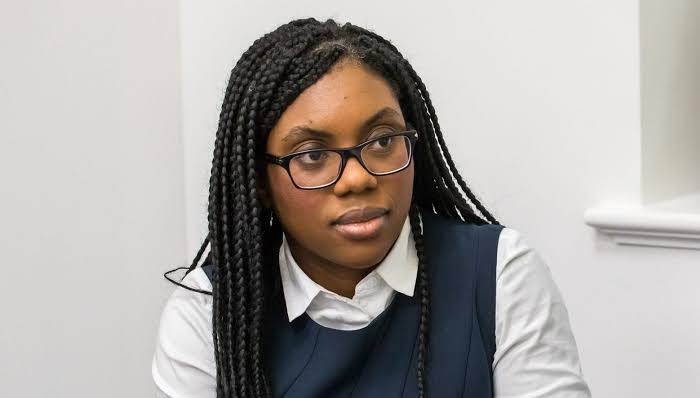 Kemi Badenoch has made it to the final five for the conservative party tussle to succeed Boris Johnson as Prime Minister.

She declared her candidacy for leadership on Twitter, writing;

“I have the conviction, the guts, and the clarity of thinking to achieve that change.”

I am grateful that so many colleagues supported me this evening.

To win the next election and deliver Conservative solutions to today’s problems, our party must stand as the party for change.

I have the conviction, the courage, and the clarity of thought to deliver that change. pic.twitter.com/TeaCjdkykp

Despite predictions that the “culture fighter” won’t become the next prime minister, Kemi Badenoch has received 49 votes and Michael Gove’s support.

In an interview with The Times, Kemi Badenoch announced her candidacy and stated her desire for a limited government and the need to “speak the truth.”

Rishi Sunak, Penny Mordaunt, Tom Tugendhat, and Liz Truss, all former UK chancellors, will contest for the position of prime minister against Kemi Badenoch, whose beliefs are grounded in free markets, limited government, and a strong nation-state.

This follows the mass resignations of a number of his ministers and advisers last week after losing their support and even that of lawmakers, which led to Boris Johnson’s official resignation as the leader of the Conservative party on Thursday, July 7th, 2022.

Femi and Feyi Adegoke, who are of Nigerian descent, are Badenoch’s parents and she was born in January 1980 in Wimbledon, London. She returned to the UK at the age of 16 after having spent part of her youth in the US and Lagos, Nigeria.

She earned her A Levels from Phoenix College, a former further education institution in Morden, London, while working at a McDonald’s location.

She also worked as a systems analyst at the Royal Bank of Scotland Group before pursuing a career in consultancy and financial services while working as an associate director of private bank and wealth manager, Coutts & Co, from 2006 to 2013 and later as a digital director at The Spectator from 2015 to 2016.

At the age of 25, Kemi Badenoch joined the Conservative Party. She ran in the Dulwich and West Norwood constituency for the 2010 general election against Tessa Jowell of the Labour Party, finishing third.

She ran for the Conservatives in the London Assembly election two years later and finished fifth on the list for all of London. She was elected as the new Assembly Member in 2015 after Victoria Borwick retired. In the 2016 election, she also kept her Assembly seat.

Badenoch was a finalist for the Conservative Party’s nomination in the 2017 election for the contested Hampstead and Kilburn seat, however she was not chosen. She was chosen as the Saffron Walden Conservative candidate, nevertheless.

In September 2017, Badenoch was selected to join the 1922 Executive Committee as she was appointed to the Parliamentary Justice Select Committee. A few months later, she was appointed as the Conservative Party’s Vice-Chair for Candidates.

Two days later she launched a bid to replace Johnson as Conservative party leader. She announced that she wanted to tell the truth and advocated a strong but limited government. She also called the target of net-zero carbon emissions ‘ill-thought through’ and said that politicians had become hooked on the idea of the state fixing the majority of problems.

In addition to having two girls and a son, Kemi is married to Deutsche Bank employee Hamish Badenoch. From 2014 to 2018, Kemi’s husband served as Wimbledon Village’s representative on the Merton London Borough Council as a Conservative councilor. He also ran in vain for Foyle for the Northern Ireland Conservatives in the general election of 2015.

Up until 2016, Badenoch served as a board member of the Charlton Triangle Homes housing association and as a school governor at the Jubilee Primary School and St. Thomas the Apostle College in Southwark. Femi, her father, died in February 2022.

IMF Warns Inflation Might Push Nigeria, Others To Brink Of Collapse