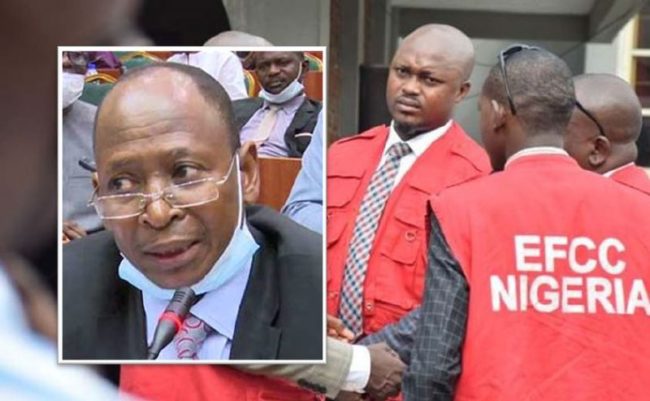 Ahmed Idris, the suspended Accountant General of the Federation, and his co-defendants were granted bail by the Federal High Court in Abuja on the terms and conditions set forth by the Economic and Financial Crimes Commission (EFCC).

Godfrey Olusegun Akindele, Mohammed Kudu Usman, and Gezawa Commodity Market and Exchange Limited are additional defendants that were arraigned alongside the AGF that was suspended.

Following their arraignment on July 22, the court remanded them in custody after finding them guilty of misappropriating around N109.4 billion in public funds.

The 14-count accusation against Ahmed Idris and the co-defendants touches on money laundering, conspiracy, and criminal breach of trust.

The accused had previously entered a plea of not guilty to the accusation leveled against them.

However, the court, in a ruling, delivered by Justice Adeyemi Ajayi on Thursday, July 28, adopted all the terms and conditions of the administrative bail the EFCC, earlier gave Ahmed Idris and his two co-Defendants.

In line with the due process and supremacy of the law, the Defendants are still entitled to bail, irrespective of the enormity of the allegations against them. The EFCC did not in any of its processes, state that the Defendants misbehaved while on administrative bail.

However, the bail conditions stated that the Defendants must remain within the Federal Capital Territory (FCT), Abuja and should they intend to travel, they would have to seek clearance from the court or have their bail revoked.

The defendants are also required to turn in their foreign passports and to guarantee that they won’t get any new ones.

The trial judge made the decision on the basis that the defendants’ accusers had not yet been proven.

Justice Ajayi held that the defendants should remain in Kuje prison until they are able to perfect their bail conditions.

IPOB Demands Immediate Release Of Nnamdi Kanu Due To Insecurity