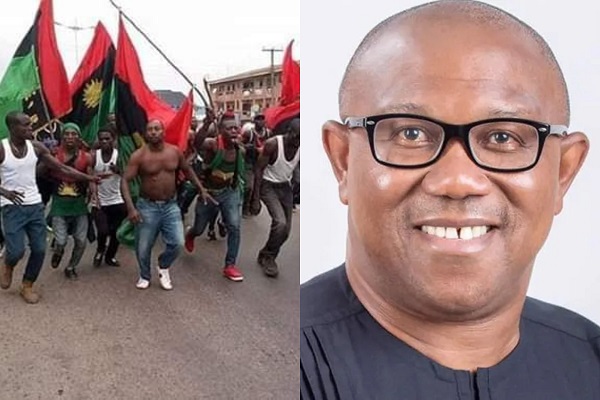 Indigenous People of Biafra (IPOB) has said the presidential ambition of Labour Party candidate Peter Obi has nothing to do with the Biafra struggle.

The group said the agitation is intact, stressing nothing would change its resolve toward Biafra freedom through peaceful and non-violent globally accepted practices.

IPOB was reacting to a comment credited to an Islamic cleric, Sheikh Gumi that the candidacy of Peter Obi, had slowed down the agitation for Biafra.

In a statement issued on Wednesday, July 13, by its Media and Publicity Secretary, Emma Powerful, the secessionist group described the comment as laughable, saying no right-thinking person should take Gumi seriously.

The most important political process that IPOB is interested in and would overwhelmingly participate in would be an International Community Supervised Referendum on Biafrans choice to stay or exit Nigeria.

Finding one’s way into public office, stealing public funds and using same to intimidating and buy shameless, dishourable delegates as if they are in “Slave action market” and subsequent votes naming that “those that understands politics” will be unacceptable in the Nation of Biafra. Nigeria election is a scam and despicable hence IPOB is not interested with Nigeria kind of politics… God forbid!

We must restore the Kingdom of God on Earth where of course our friends (Aboki Biafra, Awon óre Biafra) are free to migrate to and enjoy modern-day Freedom and Fundamental human Rights in practical terms in Africa. The British Colonial Masters haven studied the history of creativity and ingenuity of Biafrans decided to frustrate our civilization by forming unholy and retrogressive union with normadics.