Apple has concluded its 2022 Worldwide Developers Conference (WWDC) and as expected, a wide range of new products were unveiled including new MacBook Air and MacBook Pro.

The company’s CEO, Tim Cook kicked off WWDC with a pre-recorded presentation with executives revealing the latest versions of Apple’s software for iPhone, iPads, Mac and Watch.

They announced two new laptops that run on its new M2 chips, which were also revealed during the keynote, and much more.

One of the major announcements was Apple’s got a new MacBook Air, and it’s a big change from the previous one.

On the outside, the new Air has been thoroughly redesigned, now resembling a more company 14-inch MacBook Pro, with a more squared-off look than the traditional wedge shape.

Of course, that means the display now has a notch on top, but it’s also gotten bigger, now measuring 13.6-inch diagonally, and with thinner bezels than before. 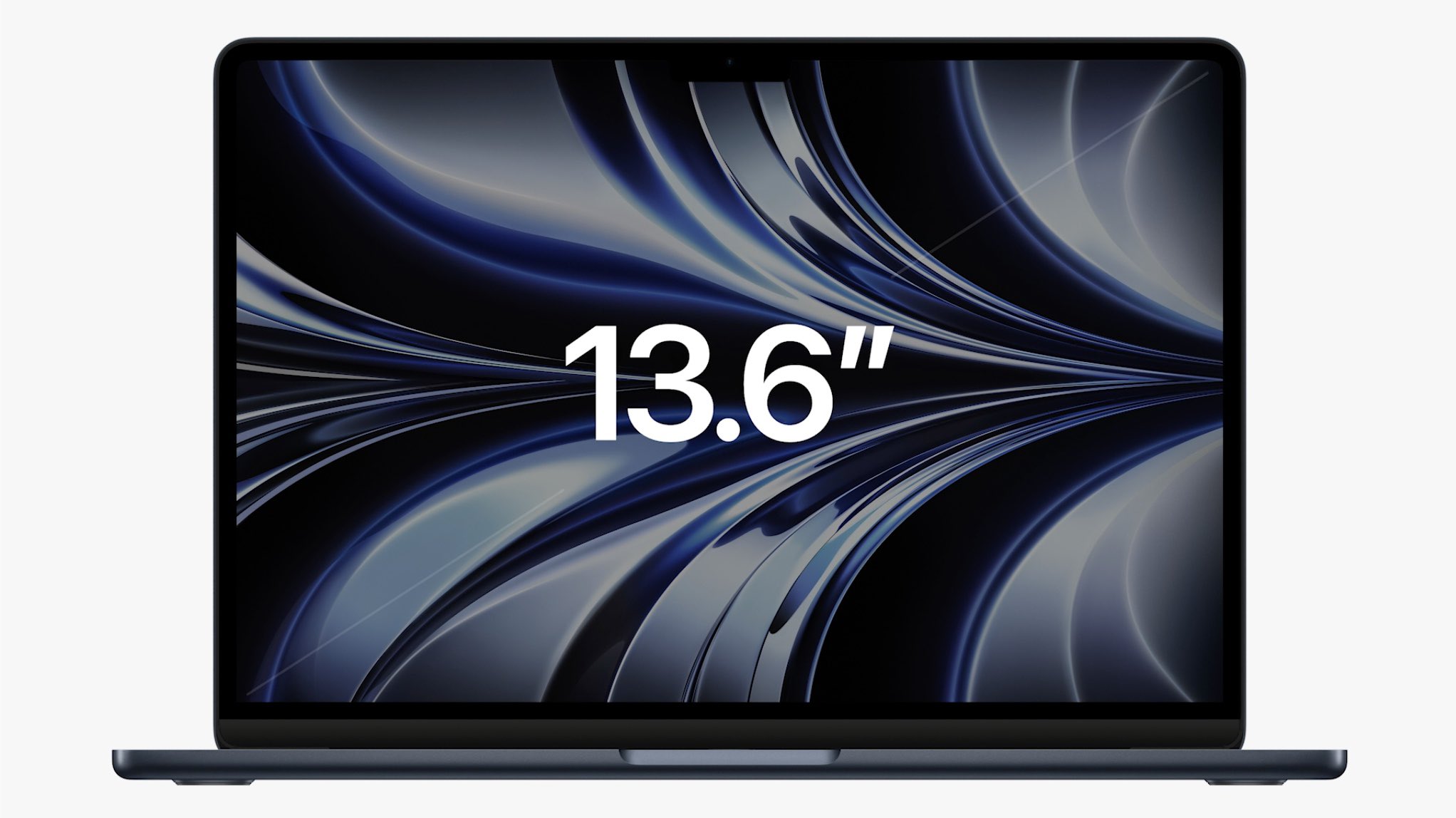 Interestingly, the new 2022 model has been designed around the more powerful M2 processor.

Also, the laptop features MagSafe charging which is designed to quickly and safely wirelessly charge your iPhone. The system intelligently adapts to conditions in order to optimize charging your iPhone at up to 15W of peak power delivery for faster wireless charging. 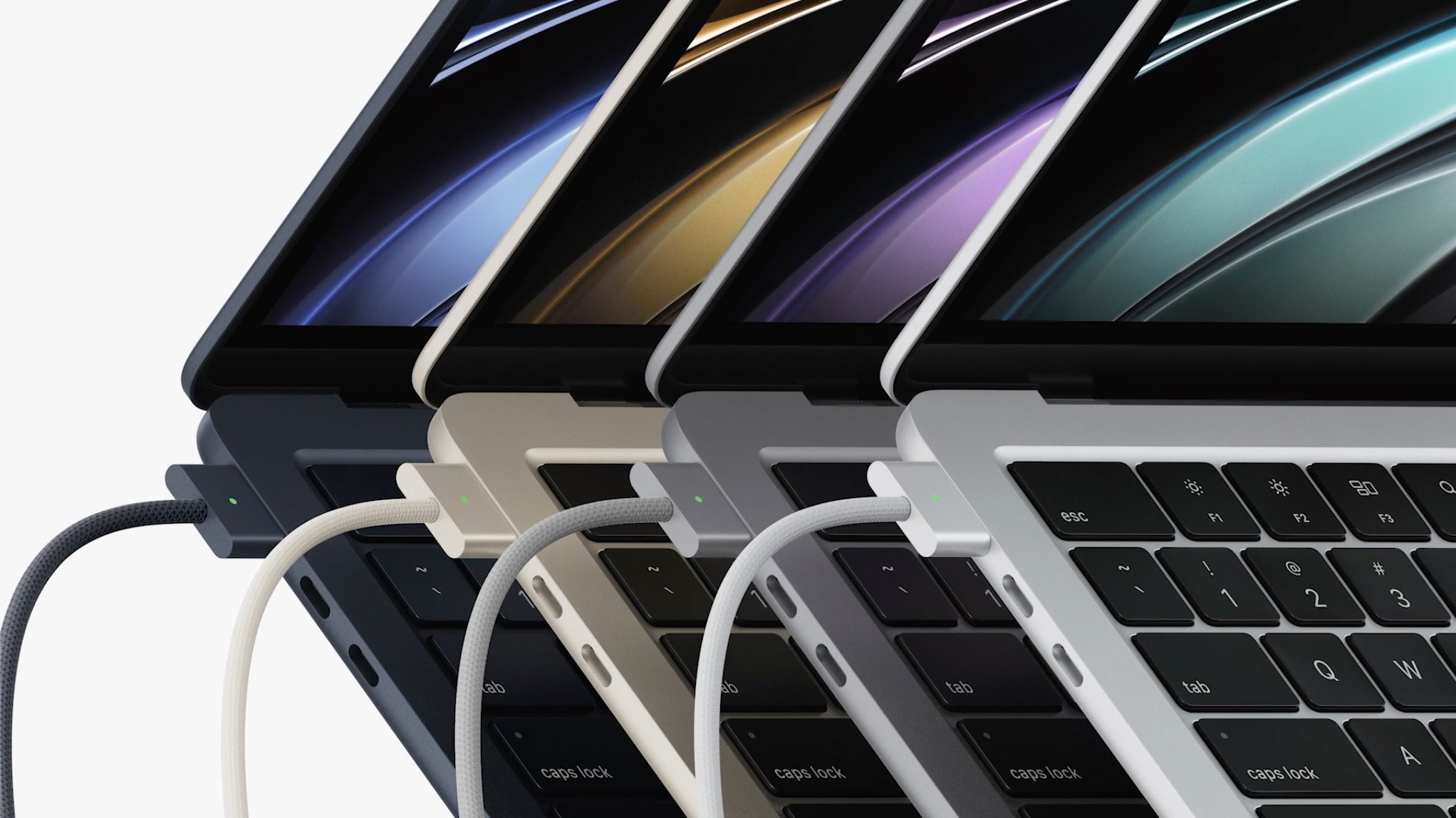 Being an Air, it’s thin and light, weighing just 2.7 pounds, with only 11.3mm of thickness when shut.

To stand out from other Macs, the new Air also comes in four colors: silver, space gray, starlight, and midnight. 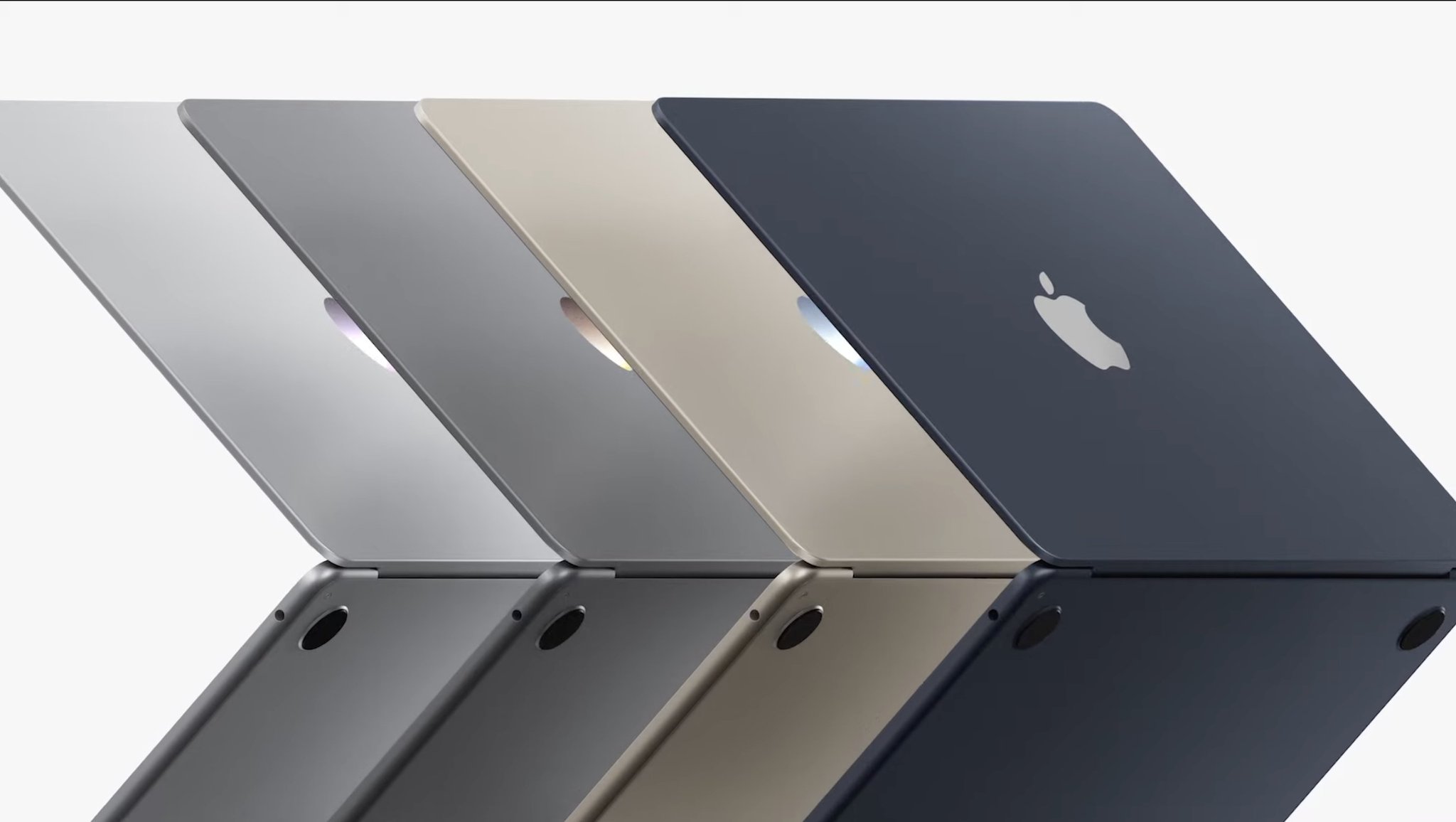 Apple says it has 500 nits of peak brightness. It features a silent, fan-less design, which is impressive given the performance gains that Apple is claiming to squeeze from the M2.

The silicon-valley company adds that the MacBook Air is 40-percent faster than the previous model, but that performance boost likely varies depending on the app.

In terms of some of the small, but important specs, this MacBook Air is getting a 1080p FaceTime HD webcam, as well as new mics and speakers that support Dolby Atmos.

Also, the new Air has a new 1080p camera with 2x the resolution and low-light performance of the previous Air, headphone jack, a four-speaker sound system, and a surprisingly cool touch in the form of a power adapter with two USB-C ports, so you can use it to charge another gadget besides the Air. 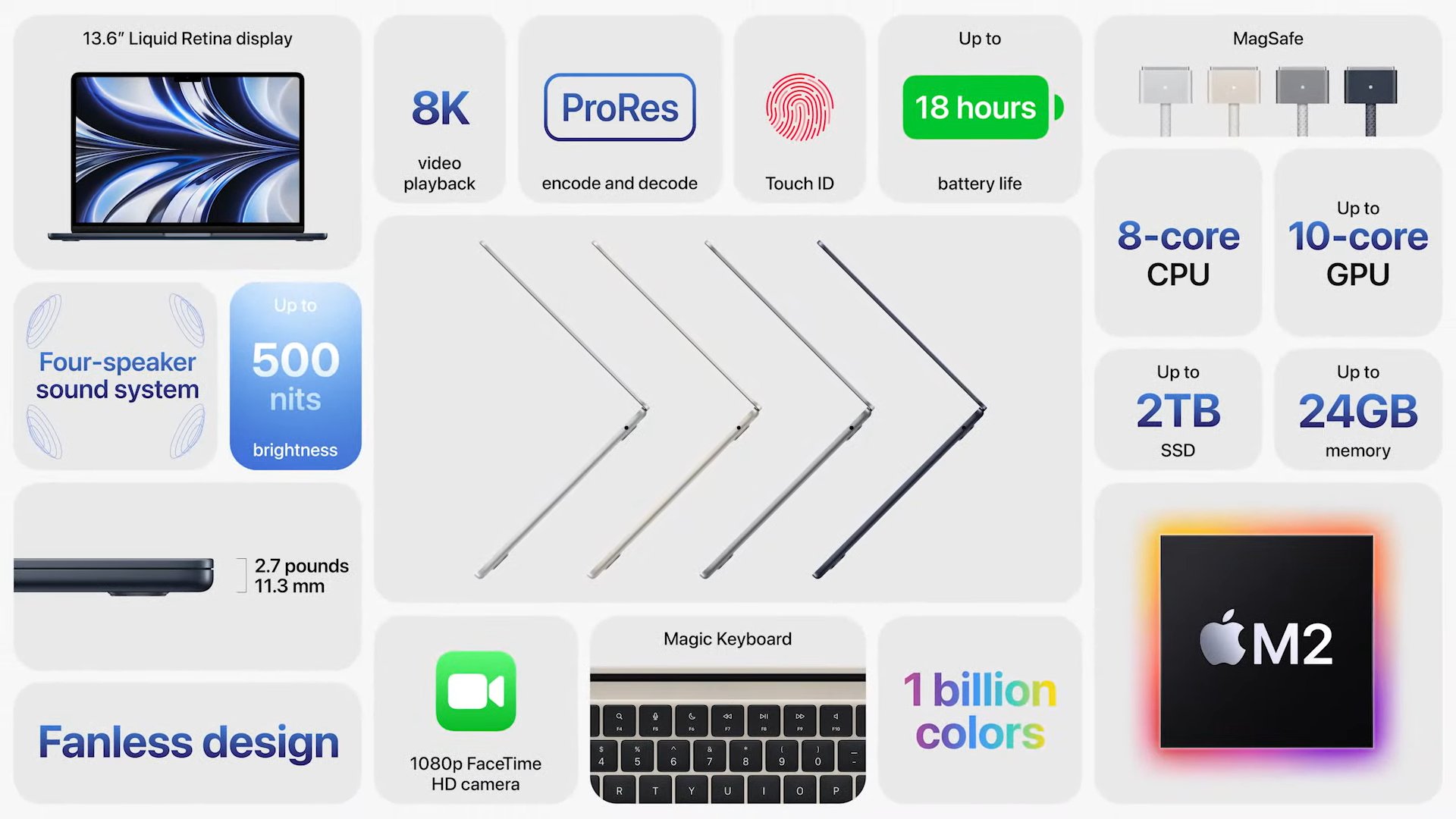 Also, this MacBook Air will be available in July starting at $1,199. The previous M1-based Air will continue to be available for $999. 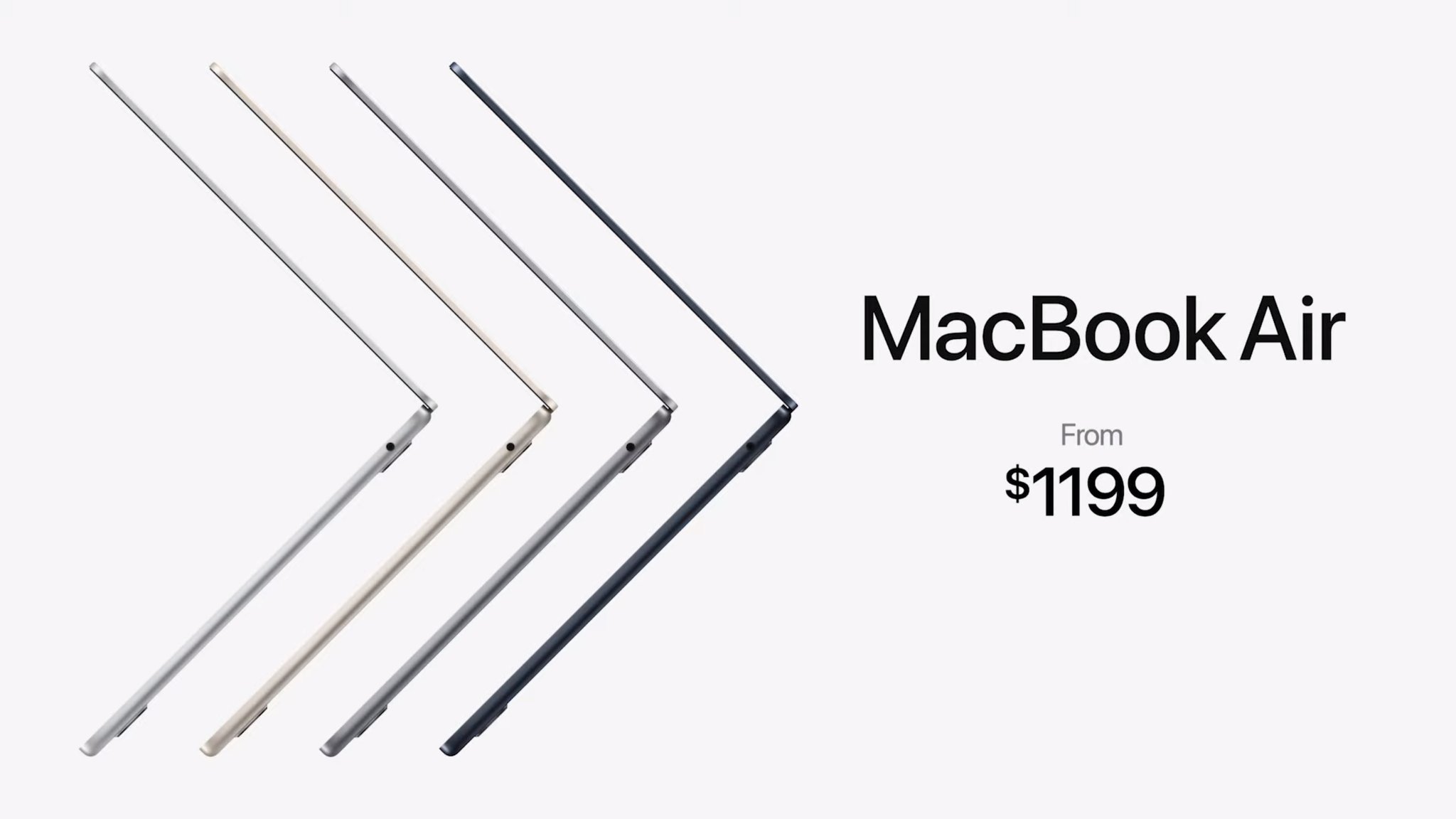 The MacBook Air isn’t the only Mac to get the M2 treatment, though. Apple also updated its 13-inch MacBook Pro with the M2 chip that promises improved performance and efficiency, including a hefty 20 hours of peak battery life (during video playback) and accelerated ProRes video processing.

However, the external appearance itself doesn’t seem to be getting much of a revamp.

The new model isn’t a major redesign like its Air counterpart, and keeps the Touch Bar. You can also expect “studio-quality” microphones, up to 24GB of RAM and a maximum 2TB of storage. Apple is also promising an 8-core CPU and 10-core GPU. 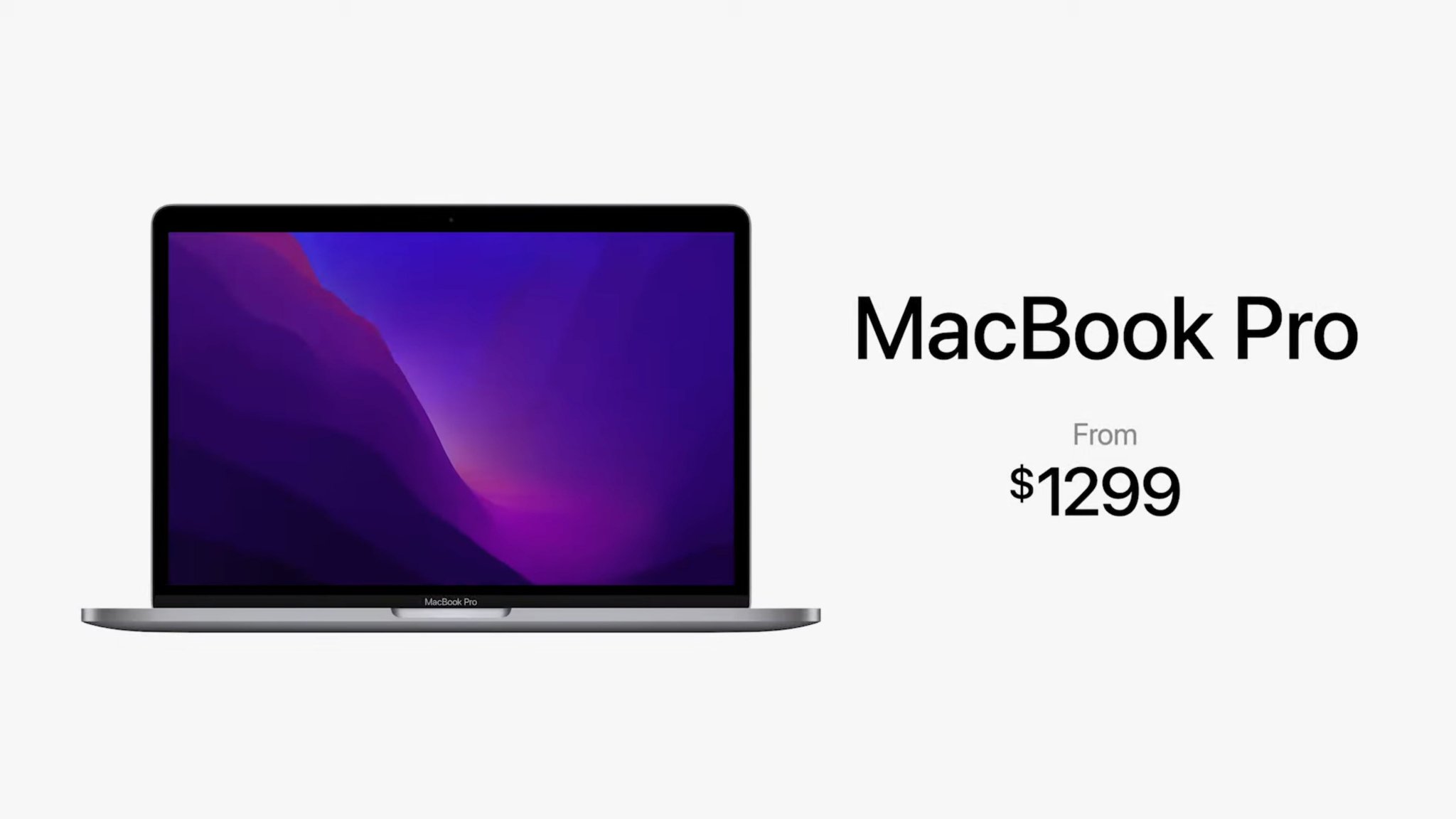 This variant will start at $1,299, and will also be available next month.