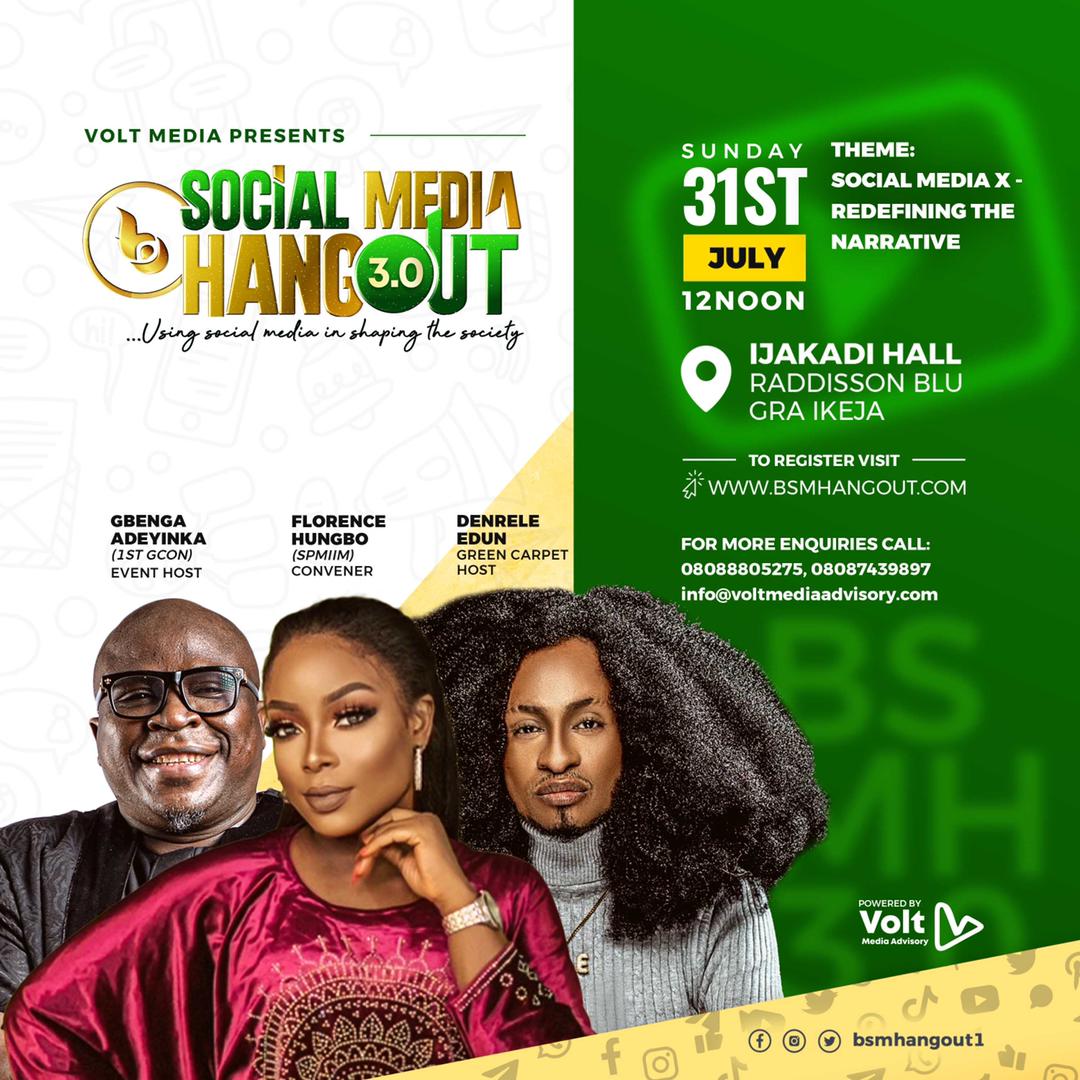 Volt Media, one of Africa’s leading communications and media agencies has announced its third edition hangout, slated for July 31, 2022.

Bodex Social media hangout was created for the celebration and recognition of principal actors within the digital media space and their many awe-inspiring acts in the past year.

Volt Media Advisory, the organisers of the media hangout, formally announced that plans are already in top gear for the third edition to be held at Radisson Blu Hotel in Ikeja, Lagos, with the theme, ‘Social Media X- Redefining the Narrative’. 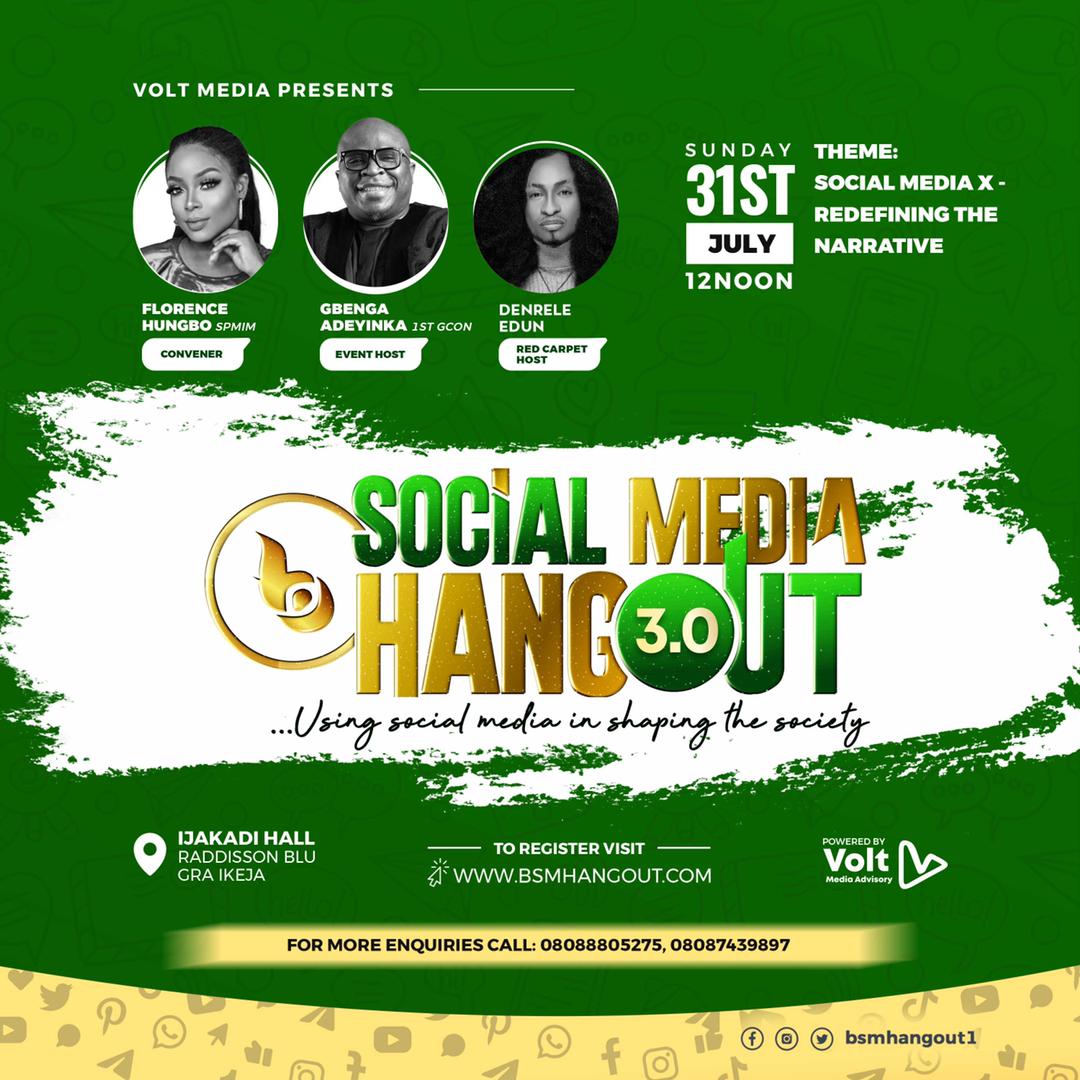 The organisers announced that;

Plans are already in top gear for the third edition holding at Radisson Blu Hotel in Ikeja, Lagos on the 31st of July 2022, with the theme, ‘Social Media X- Redefining the Narrative’.

The annual multi-city digital movement seeks to celebrate, amplify, aggregate, and recognise the efforts and achievements of Nigerian Social Media Users & practitioners by coming together to have deep discussions, appreciate one another, and network.

The event, which holds annually since 2019, save for a brief hiatus in 2020 due to the Covid-19 pandemic, brings together media stakeholders under one roof to discuss salient issues affecting the use of social media as a tool for creating stability in the environment.

Other issues to be discussed include curbing the spread of fake news and tapping into the boundless resources embedded in the use of social media. This is a means of generating income through content creation and enterprise enrichment.

Lead consultant of Volt Media Advisory and Convener of the Bodex Social Media Hangout, Miss Florence Hungbo, disclosed that this third edition had a lot of varieties to make a difference. 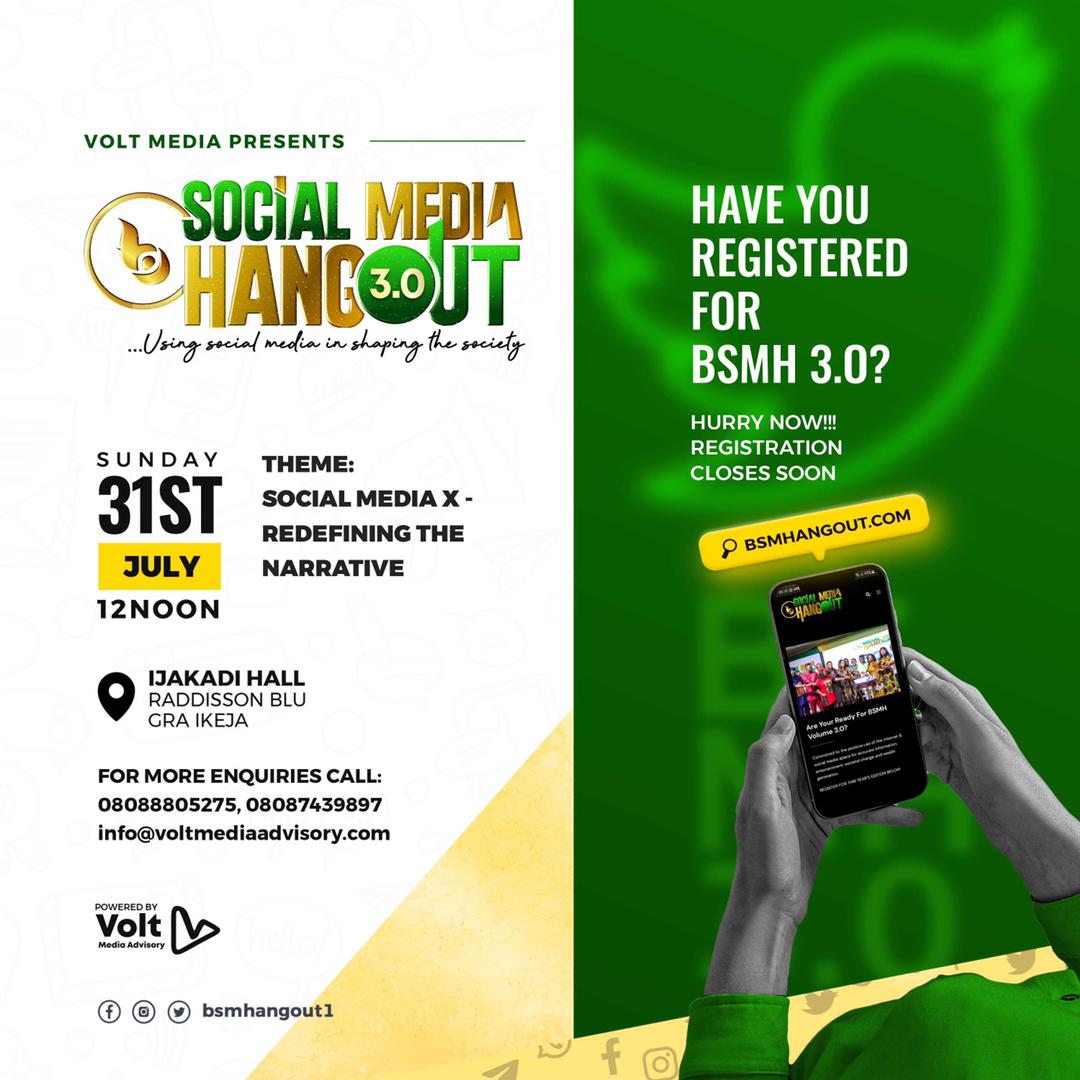 She added that the choice of Gbenga Adeyinka and Derenle Edun as the event host and green carpet host respectively was borne out of the duo’s dexterity and creative prowess over time.

After deliberations with our team, we eventually settled for the duo because of their pedigree in show business and the entertainment industry. They both will bring that glitz and glamour to the event. They are a perfect fit for what we are trying to project.

Gbenga Adeyinka is a unifier and blends with both the young and old generations, Derenle is not a greenhorn when it comes to hosting the green carpet at events. They are both ready to bring their experience to play and ensure we have a smooth, dramatic, and fun-filled event.

On the uniqueness and excitement surrounding this year’s edition, she further explained;

This year’s edition is strictly by registration and invitation and is power-packed. We have varieties of speakers, moderators, panellists, and observers like Aproko Doctor, Efe Omorogbe, Iyabo Ojo, Omojuwa, and other celebrities and media personalities. We will also have in attendance stakeholders like NDLEA, EFCC, LAMATA, Entrepreneurs, Ministry of Information, Nigeria Police Force, and other stakeholders to discuss the ‘Impacts Of Social Media On Law Enforcement.

She also revealed that artistes like Wale Thompson, Aralola Olamuyiwa ‘Ara’ (First Female Drummer) Humblesmith, Skales, and others will grace the occasion while DJ Kexzy would be on the wheel.

There are other side attractions as well.

To be part of this unique digital media event, kindly register via our website at www.bsmhangout.com to secure a seat and an invite.

To make the night more memorable, we hope to have in attendance the Governor of Lagos State, Mr Babajide Sanwo-Olu; Brig. Gen. Mohamed Buba Marwa (Retd), OFR
Chairman/Chief Executive of the National Drug Law Enforcement Agency, NDLEA, representatives of other government parastatals, and other guests from all walks of life.