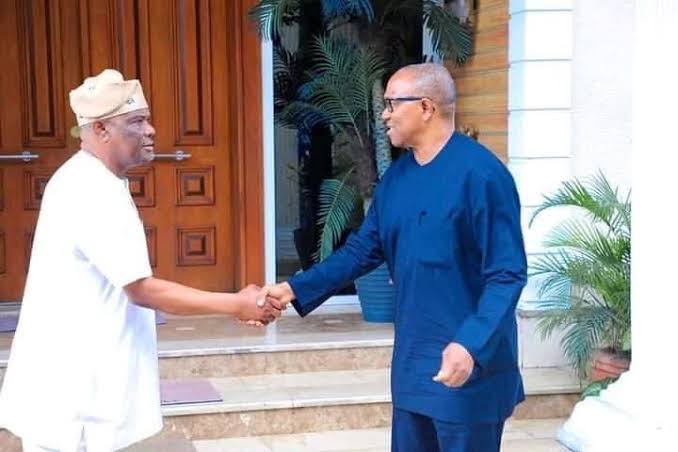 Peter Obi was taken inside the governor’s home for closed door meeting.

However, details of the meeting are not clear as journalists were not granted access.

Read Also: “I Don’t Have Any Problem With Him,” Peter Obi Reacts To Mbaka’s Comment

The details of their meeting, which held behind closed doors, were also not made available to newsmen.

Obi’s meeting with Wike is coming amidst efforts by his party to form an alliance with with Rabiu Kwankwaso’s New Nigeria Peoples Party (NNPP).

Although the talks are yet to be successful, the NNPP has dismissed suggestions that Kwankwaso, who has a strong followership in the North, would agree to be Obi’s running mate.

NNPP’s Spokesperson Major Agni told newsmen on Tuesday that the only condition for a coalition with the LP was for the former Anambra State governor to agree to be running mate to the former Kano governor.

He said Kwankwaso remains the most acceptable among the presidential candidates of the various political parties in the country.

The NNPP spokesman insisted that the party has continued to receive calls that Kwankwaso must not step down for Peter Obi, maintaining that the only acceptable conclusion is that Peter Obi should accept to be Kwankwaso’s deputy.

According to the party, Kwankwaso has affected the lives of ordinary people, stressing that his antecedents speak for him and therefore he should be allowed to head the LP/NNPP arrangement.

We have continued to receive calls. A lot of people have called to say, no, we will not accept that. That the only thing we want you to arrive at is a conclusion that Peter will be deputy.

He argued that although Peter Obi was a “nice man”, who has also done well, it is unacceptable that he should lead whatever political agreement is reached as it concerns the 2023 presidential election.