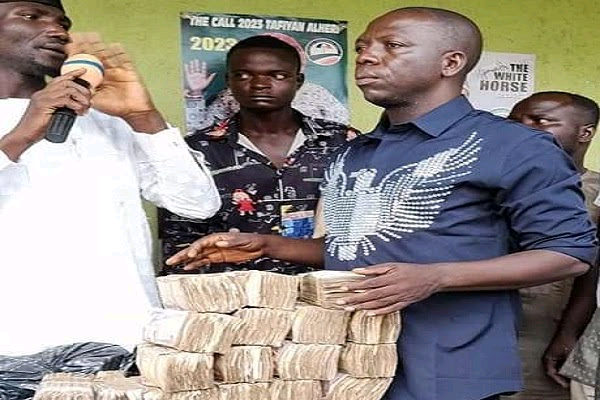 Tanko Rossi Sabo, who is one of the delegates of the PDP in Kaduna State said, on Thursday, June 2, that the money he received from aspirants has been shared among indigent members of his community in Sanga Local Government Area.

Read Also: ‘We Have No Excuse’ – El-Rufai Says It’s Time To Restructure Nigeria

He bought jerseys, paid school fees and settled hospital bills. He distributed the rest to other support groups.

Whatever is the argument on whether he was right in collecting the money or not, my consolation is that hundreds of the less privileged in his community are smiling today.  For that, I say well done, Tanko.

Sabo was among the Kaduna State delegates who were at the national convention of the PDP in Abuja where former Vice-President Atiku Abubakar was elected the party’s presidential candidate ahead of the 2023 general election.

Tahir Tanko, the son of  Sabo wrote on his Facebook wall that his father had promised to shared whatever he got from the primary election into two to sponsors orphans writing the Senior Secondary School Certificate Examination (SSCE).

Amongst the whole of Kaduna State PDP delegates, my daddy (Tanko Rossi Sabo) stands exceptional, for his way of doing things is entirely different.

He is a delegate who voted for the House of Assembly member, Federal House of Representatives, senatorial, governorship and the presidential candidates. He promised before the start of the elections that anything he got in this process of the elections would be saved and half of what he got would be used to pay off WAEC and NECO exams of orphans in his community, and behold he is keeping the promise.  “Tell me of anyone (other) like my daddy #TankoRossiSabo?

Depp Vs Heard: Between An Abused Victim And A Victimised Abuser

Wike Says He Won’t Leave PDP Despite Withdrawal From…