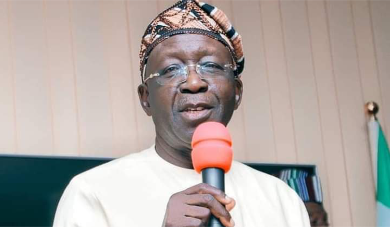 National chairman of Peoples Democratic Party (PDP), Iyorchia Ayu, has charged the party’s governorship candidates to reconcile with aspirants who lost out of the primaries before the 2023 governorship elections.

Ayu gave the advice this while presenting Certificates of Return to the candidates, advising them to remember that many were called but few were chosen.

Read Also: Tambuwal Reveals Reason Over Decision To Step Down For Atiku During PDP Primaries

The PDP leader told the candidates;

Presentation of certificate of return to PDP gubernatorial flag bearers.

You were chosen to be our flag bearers at the forthcoming elections. Everybody who contested with you was also chosen. You must carry every member of the defeated aspirants’ communities along because they contributed in mobilising and growing our party.

I want to sincerely thank you for the work you put in. And we hope you will continue to work hard because this is just the first step.

He said he is confident that the PDP would win governorship seats in 25 states at the 2023 general elections, and retain all its 13 states because its governors had performed very well.

You must carry every member of the defeated aspirants’ communities along because they contributed to mobilising and growing our party. We believe that the PDP will go back to its winning ways.

When we started in 1999, we were able to produce 21 governors; we grew that number in 2003 to 28 and sustained it at 28 up to 2007. Unfortunately, we came through hard times, and the number declined. Today we have only 13 governors. For a political party of this stature, that number is not good enough.

On his part, the party’s presidential candidate, Atiku Abubakar, while speaking at the event said it was evident that the PDP was the party Nigerians were waiting for.

Congratulating the gubernatorial candidates, Mr Abubakar urged them to be united and work for the victory of the PDP.

Meanwhile, the party’s governorship candidates were issued their certificates of return, except for Ebonyi and Kano, because of legal issues within the party in the states.