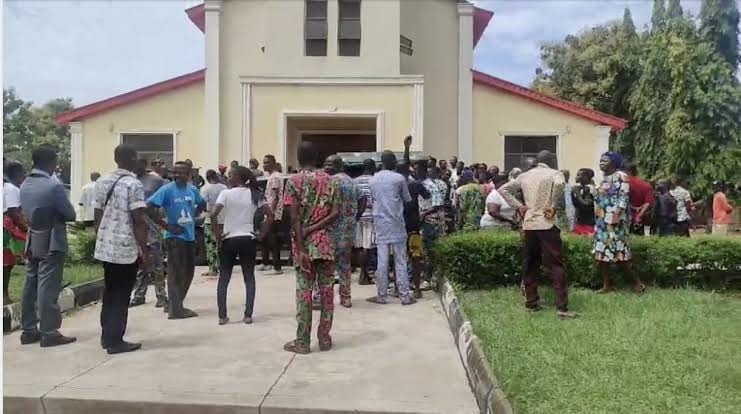 Olowo of Owo, Oba Gbadegesin Ogunoye III has announced the arrest of the alleged perpetrators of the attack on St Francis Catholic church, Owo, Ondo State.

Recall that on Sunday, June 5, unknown gunmen stormed the Catholic Church, killing 40 people dead; and injuring at least 60 others.

Following several calls for the perpetrators to be apprehended, Oba Ogunoye in his native language announced the arrest of some gunmen to the mammoth crowd massing up at his Palace grounds on Thursday evening.

UPDATE: See HRH, Oba Ajibade Gbadegesin Ogunoye (The Olowo of Owo) in his native language announcing the arrest of some gunmen to the mammoth crowd massing up at his Palace grounds this evening (Thursday, June 9, 2022). 1/2 pic.twitter.com/hozkcVAfqg

Also, a video of a mammoth crowd in the palace of the Oba of Owo emerged online following the arrest of the alleged gunmen.

BREAKING: Youth protests as Some persons suspected to have been the perpetrators of the church attack in Owo killing 22 persons have been arrested and being moved to Akure….details coming! pic.twitter.com/kETYgQNklt

The video below shows moment when Nigerian Army brought the culprits to the palace; as they were been escorted by the indigenes of Owo.

UPDATE: Video shows moment when @HQNigerianArmy were bringing the culprits to the palace as they were been escorted by the indigenes of Owo. https://t.co/knOH4vmBlG pic.twitter.com/wdRCQ6sOrv

Video: The Olowo of Owo, Oba Ajibade Gbadegesin Ogunoye was earlier addressing his people; confirming the security forces have arrested the suspects pic.twitter.com/LHHP89OGBc

However, neither Olowo’s Palace nor the Ondo State Police Commissioner have release a statement confirming the arrest.

In other news, National Security Council on Thursday alleged that Islamic State West Africa Province (ISWAP) is responsible for the attack on St. Francis Catholic Church.

Rauf Aregbesola, the Minister of Interior, stated this to State House Correspondents; after the National Security Council meeting in Abuja on Thursday, June 9.

According to the former governor, the attack has no ethnic or religious ties; and the activities of ISWAP have nothing to do with religion.