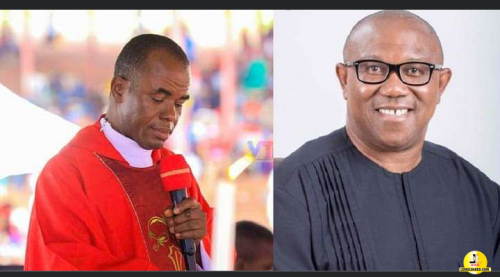 Rev. Fr. Ejike Mbaka, Spiritual Director of the Adoration Ministry in Enugu, Nigeria, issued a public apology to Labour Party presidential candidate Peter Obi and his supporters on Friday, June 17, a day after describing the politician as stingy and unfit to be President.

“Peter Obi is going nowhere as far as God lives,” the outspoken Mbaka said during one of his Enugu radio shows. “If the Igbo want someone to represent them, it’s not Peter Obi.”

Explaining his grouse with Obi, the cleric had said;

A stingy man that cannot give people his money, with this hunger ravaging the land, and you are saying he is the one you want. You want to die of hunger? Are you people insane? Where is the Holy Spirit?

However, Obi’s fans reacted angrily to his remark, and the Catholic Diocese of Enugu State criticized the bishop and rejected his remarks.

The church stated the verbal attack on Obi violated Canon 220 of the 1983 Code of Canon Law, which prevents anyone from illegitimately hurting the good reputation of another person, while condemning Mbaka’s political remarks as divisive and unbecoming of a priest.

Consequently, Mbaka asked for the understanding and forgiveness of Obi and his supporters in an apology letter headed “Rev Fr Ejike Mbaka Blesses His Excellency Peter Obi and His Supporters,” praying that God would grant the Labour Party’s presidential candidate’s heart wants.

I am a servant of God and my intention is not to malign His Excellency, Peter Obi’s image, but to pray for him. May God’s will be done in his life.

I pray to God, whom I serve, to give our beloved people good and excellent leaders who will take care of them and lead them to the Promised Land. Anyone who God wishes to make our leader is my choice.

In any way, the supporters of Mr Peter Obi feel offended by my utterances or however I was misunderstood by them, I ask for their understanding and forgiveness. As a servant of the Most High God, I pray that it shall be well with my people. I am an ardent supporter of good governance, justice, equity, love, and godliness.