Lagos Govt Says No Going Back On Okada Ban As 2,228 Motorcycles Get Impounded 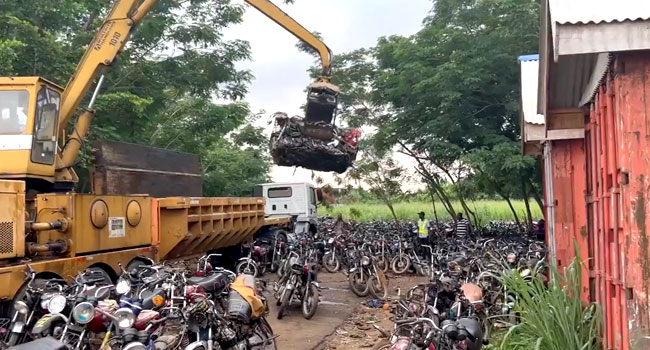 Lagos State government has said there is no going back in its decision on impounding Okada, popularly known as commercial motorcycle in six local government areas and nine local council development areas of the State.

CSP Shola Jejeloye, the Chairman of Lagos State taskforce made this known in a statement signed by Director, Press and Public Affairs, Gbadeyan Abdulraheem.

The statement was signed by the Director, Press and Public Affairs, Gbadeyan Abdulraheem.

Abdulraheem quoted Jejeloye saying that the agency will intensify its effort in ensuring that all impounded motorcycles are crushed after following the due process.

Following the announcement of a total ban on operation of commercial motorcycles popularly known as Okada on all highways across six local government areas and nine local council development areas  of the state by the Lagos State Governor, Mr Babatunde Sanwo-Olu, the Chairman of the Lagos State Taskforce, CSP Shola Jejeloye, has said that the agency will on Friday crush another set of 2,228 impounded motorcycles to further make the enforcement of the ban thorough and effective.

Their style of operation is synonymous to guerrilla warfare- when we retreat, they advance, and when we advance, they retreat, but enforcement on the ban has come to stay.

We will ensure not a single offender operating his okada on the highways will be spared. We will keep watch and continue patrolling the affected parts of the state to ensure they do not get back on our roads.

He said the agency had impounded over 259 bikes during the first two days of the ban while 18 suspected riders and passengers were arrested.

All the suspects will be prosecuted for violating the state laws. Passengers will not be spared this time around, and they will be charged accordingly in the court of law.