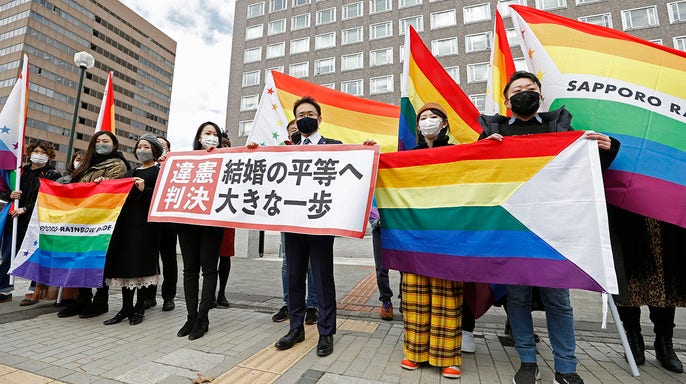 A court in Japan ruled on Monday, June 20, that a ban on same-sex marriage was not unconstitutional, dealing a setback to LGBTQ rights activists in the only Group of Seven nation (G7) that does not allow people of the same gender to marry.

The G7 is an informal grouping of seven of the world’s advanced economies: Canada, France, Germany, Italy, Japan, the United Kingdom, the United States and the European Union.

The ruling dashes activists’ hopes of raising pressure on the central government to address the issue after a court in the city of Sapporo in March 2021 decided in favour of a claim that not allowing same-sex marriage was unconstitutional.

Three same-sex couples – two male, one female – had filed the case in a district court in Osaka, only the second to be heard on the issue in Japan.

In addition to rejecting their claim that being unable to marry was unconstitutional, the court threw out their demand for 1 million yen ($7,400) in damages for each couple.

Plaintiff Machi Sakata, who married her U.S.-citizen partner in the United States, said;

I actually wonder if the legal system in this country is really working. The two are expecting a baby in August.

I think there’s the possibility this ruling may really corner us.

The two are expecting a baby in August.

The  constitution in Japan defines marriage as being based on “the mutual consent of both sexes”.

However, the introduction of partnership rights for same-sex couples in Tokyo last week, along with rising support in opinion polls, had raised the hopes of activists and lawyers for the Osaka case.

The Osaka court said that marriage was defined as being only between opposite genders and not enough debate on same-sex marriage had taken place in Japanese society.

Lawyer Akiyoshi Miwa, added that they would appeal;

We emphasised in this case that we wanted same-sex couples to have access to the same things as regular couples.

Japanese law is considered relatively liberal in some areas by Asian standards, but across the continent, only Taiwan has legalised same-sex marriage.

Under current rules in Japan, members of same-sex couples are not allowed to legally marry, cannot inherit each other’s assets – such as a house they may have shared – and also have no parental rights over each other’s children.

Shooting: Obi Cubana Says Cubana Group Have Given All Information To Police

Bisi Alimi Appeals To Gay Men To Desist From Walking Down…