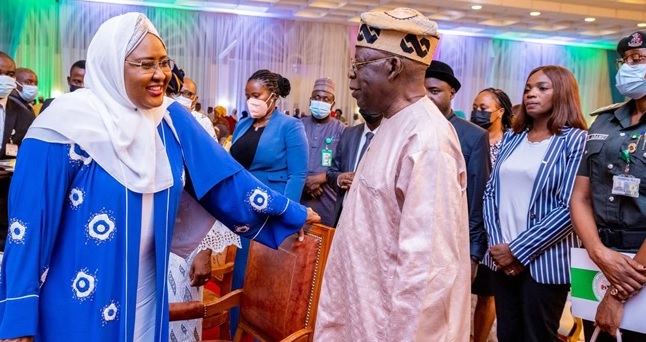 Aisha Buhari, the political wife of President Muhammadu Buhari, is said to be a key player in Bola Tinubu‘s triumph at recently concluded All Progressives Congress’s presidential primaries.

Recall that Tinubu, former governor of Lagos state, on Tuesday defeated 13 other aspirants to win the presidential ticket of the All Progressives Congress (APC) at the Eagle Square, Abuja, on Wednesday.

A total of 2,322 ad-hoc delegates were drawn from the 35 states and FCT to participate in the primary to elect the APC flag bearer out of the aspirants jostling for the ticket. However, only 2,203 delegates were accredited to vote.

However, days before Tinubu’s victory, there were fears that aspirations might be jeopardised after his Abeokuta outburst.

While speaking about why he should be voted for at the primaries in Yoruba language, the former governor of Lagos said Buhari had given up and cried on national TV after failing thrice in his quest to be elected president.

But I went to his home in Kaduna. I told him ‘you would contest and win, but you won’t joke with the matter of the Yoruba’…” He insisted in Abeokuta that it is the turn of Yoruba to produce the president and in Yorubaland, “it is my turn”.

Despite the fact that he spoke Yoruba, his words were translated into English in a way that made it appear as if he was insulting and mocking the president.

According to individuals who spoke with TheCable, Buhari was initially outraged and the presidency in reaction dismissed the assertion.

Sources who spoke to the publication said in reaction to the alleged disrespect of Mr President, Adamu chose Ahmad Lawan as APC’s consensus leader in order to “cage” Tinubu.

In other to make amends, Tinubu also made a contrite statement, claiming that he did not want to offend the president.

Aisha Buhari, The Woman Of Influence

However, Aisha Buhari amid all the happenings was said to have insisted that Tinubu said nothing wrong.

Aisha reportedly wanted APC chieftain to keep up the pressure to scare off the “useless people” in the president’s circle who were working against Tinubu’s presidential ambition.

The sources further stated that the president’s wife recalled that a promise was made to Tinubu prior to the 2015 presidential election, and Buhari was obligated to keep his word as “a man of integrity.”

She opined that even if the President does not support Tinubu, he should not obstruct him or give in to pressure to vote for Senate President, Ahmad Lawan as consensus candidate.

At the convention ground, it was observed that Aisha Buhari clapped enthusiastically when former Ekiti state governor and presidential aspirant, Kayode Fayemi opened the floor by announcing his withdrawal from the race in support of Tinubu.

Aisha Buhari reportedly barred various politicians from meeting with her husband at the presidential palace on the day of the convention; in order to prevent him from being persuaded to change his mind about a consensus candidate.

Regarding choosing a consensus candidate, the presidential spokesman, Femi Adesina, had in a statement revealed that Buhari would not meddle – a presidential position which Aisha Buhari shared across all of her social media accounts.

Additionally, on social media, a photo appeared to show her wearing a frock with Tinubu’s logo on it, indicating her support for the APC national leader.