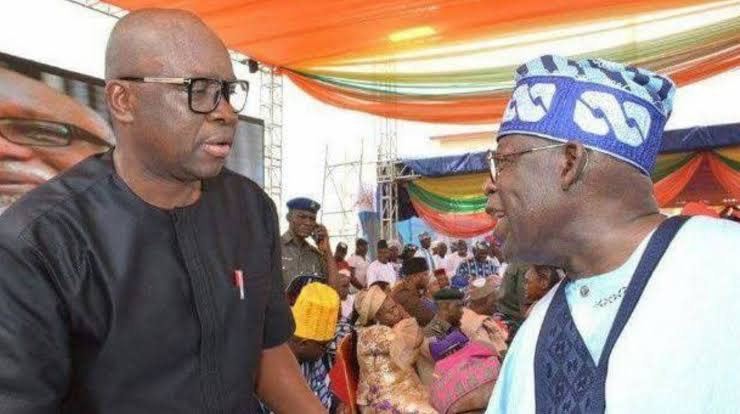 Ayodele Fayose, the former governor of Ekiti State, has advised the All Progressives Congress’s (APC) National Leader, Bola Tinubu to tread lightly in his bid for the party’s presidential ticket.

Fayose gave the advise in an open letter shared via his Twitter page on Monday, June 6.

The former Ekiti State Governor warned of the dangers that would await him; if he participated in the APC presidential primary scheduled for Tuesday in Abuja.

Fayose was responding to the reaction that followed Tinubu’s remark; the one about President Muhammadu Buhari in Abeokuta, Ogun State, last week.

He also warned that Tinubu might be subjected to the same treatment meted to the late former Premier of the old Western region, late Chief Obafemi Awolowo.

The letter by Fayose read:

Let me start this letter to your good-self whom I considered as one of the leading lights of the Yoruba nation; as a letter that may not be patronizing. Especially for the content based on the subjective views I will express here as a Yoruba man and not as a politician.

I equally wish to state that I am not an APC man and will never be.

I am writing based on my observed views; and the attached possible dangers about your good-self tomorrow.

One of the undeniable facts about your outburst in Abeokuta, which is a clear indication that you clearly saw a political danger to which you reacted. This informed the basis of my writing to you now.

I equally read the reactions of your political allies both in the North and in the South. The reactions gave me a great concern for you and your life. Again, I see danger!

As a knowledgeable student of history whom you are, our great sage, Chief Obafemi Awolowo and the celebrated winner of the June 12, 1993 general election, Alhaji Moshood Kashimawo Olawale Abiola, were led to the Golgotha by Self acclaimed “Champions of Democracy.” I am sure the same people may advise you to ignore my advice.

Going by the handwriting that is now clearly on the wall, if I may comment sir, I see you as one that may be swimming against the political tide of the cabal in your party. They are equally preparing for your actions and reactions; and are fully set to contain the same as they did to both Awolowo and Abiola.

Unfortunately your kingdom has been badly balkanized if what happened in Abeokuta is anything to go by.

The book of Proverbs chapter 22 verse 3 (The Good News Translations)), “sensible people will see trouble coming and avoid it; but unthinking people will walk into it.

Again, Asiwaju, for reasons of not being misinterpreted, I will like to stop here; and allow you to make your decisions, good or bad as the wise full-grown adult who you are.